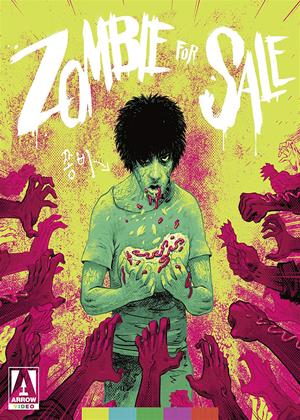 Synopsis:
When the illegal human experiments of Korea's biggest pharmaceutical company go wrong, one of their "undead" test subjects escapes and ends up in a shabby gas station owned by the Park family - a band of misfits spanning three generations who hustle passers-by to make ends meet. When the Park family uncover their undead visitor, he bites the head of their household, who instead of transforming into an undead ghoul becomes revitalised and full of life! The family then hatch a plan to exploit this unexpected fountain of youth, allowing locals to pay to be bitten too, until things go wrong...
Actors:
Se-ah Jang, Jae-yeong Jeong, Ga-ram Jung, Nam-gil Kim, Soo-kyung Lee, Ji-won Uhm
Directors:
Lee Min-jae
Producers:
Eum Zoo-Young, Jang Jin-Seung
Aka:
Gimyohan Gajok
Genres:
Comedy, Horror
Countries:
Korea

Reviews (1) of Zombie for Sale

Let us talk of cabbages and dead things... - Zombie for Sale review by DS

Zombies, again, in a way and very much as George Romero predicted but they have taken over the world, they are ubiquitous. In Zombie for Sale, we have the South Korean type seeming more akin to tottering about and biting people, but never eating them. Lee Min-jae has treated the undead, infected, whatever you choose to call them in the only way that they should be now – comedic.

Truth be told there is a rich vein of previous zombie films that Lee Min-jae has mined here, Land of the Dead, Shaun of the Dead, Warm Bodies, and every serious and not so serious undead film between Night of the Living Dead and now. Zombie for Sale is not on the gruesome gory side of the equation at all. What the film really pins its flag to is the odd-ball family, outsiders, in peril. Family is the most important component throughout, and making money, surviving, outweighs everything, even a zombie apocalypse. The film starts off slowly, and very much says to the audience, ‘comedy’ and then after stumbling a bit, tilts into chaotic and never returns from that point.

The Park family are dishonest and disorderly and whilst these characters could be dislikeable because of their family dynamic and charisma they are the likable centre of the film. All the actors acquit themselves well, with Korean ‘everyman’ actor Jae-yeong Jeong pitching the dishonest, cowardly eldest son, Joon-Gul perfectly, the two main female characters, played by Jae-yeong Jeong and Soo-kyung Lee are easily equal and most ways superior to the main male leads as characters, which is nice to see. For the style of film and situations we are placed in all the acting fits well. Ga-ram Jung in a non-speaking zombie role does very well in what must have been a thankless task at the time. Finally, the whole reason for the direction of the story the matriarch of the Parks is played by elder statesmen actor Park In-hwan and cadre of older men, this is the comedy heart of the film, purely there for laughs. Perhaps over-the-top and bit vaudeville, end-of-the-pier style but it holds together within the context of the film.

The directing and cinematography are good. Fast paced and frenetic, the story is linear, and each scene and act follow into the next and makes sense. Sounds odd to say that but how often does this fundamental method of telling a story does not occur and leaves you frustrated or worse confused when watching a film. With plenty of wide tracking shots to show off the lush greenery of the South Korean countryside and the set piece action, several well set-up and more reminiscent of more serious horror.

Comedy, like every tome in film-world, is in the eye of the beholder so to speak. Zombie for Sale probably had a Korean flavour to the comedy, it is painted in extremely broad strokes and will seem a bit ‘stagey’ for some, so it is entirely understandable why some will not like the film. I am not qualified or have enough knowledge of the South Korean film industry and acting style to know if this is how their broader comedy tastes are in general but for me, the topic of the film makes the style of the comedy perfect.

The film has faults like every film and just to fit in with the universal complaint about films it probably outstays its welcome and some judicial trimming who have made the whole slicker and in keeping with the bish-bash-bosh aesthetic. Having said this I particularly liked the ending which was very funny and upbeat and one particular plot point, not that important, but glaring enough for most regular filmgoers to say, ‘Hang on, what about?....’ is quickly and neatly cleared up. I liked that, it was if Lee Min-jae said, ‘You know what they will say when they see this? Let’s head them off at the pass’.

Zombie for Sale, or Odd Family: Zombie on Sale or Gimyohan gajok is frantic, chaotic, perilous, daft, silly, over-the-top, entertainment and let us be honest that is what it set out to be.