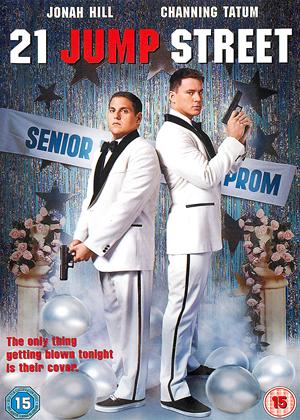 ’21 Jump Street’ is both an 80’s TV series that introduced Johnny Depp en masse and a buddy-cop flick this 2012. The movie ’21 Jump Street’ is inspired by the original TV series, where Jump Street is an undercover police program for baby-faced officers who are asked to pretend to be high schoolers. ‘Cause there’s criminality among teens and in the movie starring Channing Tatum and Oscar nominee Jonah Hill, it’s a drug ring ran by a charming youngster (Dave Franco). How Tatum and Hill can pose as teens now in their 20s – how they became buddies even is a hardsell too – is not the only obstacle that they have to overcome. Trust me, comedies do have plot points.

Directed by Phil Lord and Christopher Miller (‘Cloudy with a Chance of Meatballs’), they jump from kid-friendly animated fare to R-rated hilarity on ’21 Jump Street’. With screenwriting credit by Michael Bacall and Jonah Hill, the TV-inspired movie has been transformed into a laugh-out-loud satire on such issues as teen-dom, drugs, homophobia, et cetera, et cetera.

No holds barred, it’s a free-for-all that has hunky Channing Tatum and Jonah Hill making a case for the odd buddy-cop couple to beat. Hill is no stranger to comedy, Tatum is more of the hunky-dramatic-action star but you can’t deny Tatum can roll with the best of them (he was in the teen comedy ‘She’s the Man’ with Amanda Bynes) and it’s a bromance worth watching. Another great choice is having their bitter and angry Jump Street captain played by Ice Cube. Back in the day, Ice Cube raged against the police; in this movie, he IS the police.

In terms of comedy and one-liner zingers, ’21 Jump Street’ is refreshingly good. What was a bad idea before has been a good risk now. But the action sequences are limiting if not unimpressive, thanks to its directors inexperience shooting scenes like it. In the end, it’s really Channing Tatum and Jonah Hill’s pairing as its saving grace. I’m looking forward to having them team-up yet again for a different kind of movie next time.