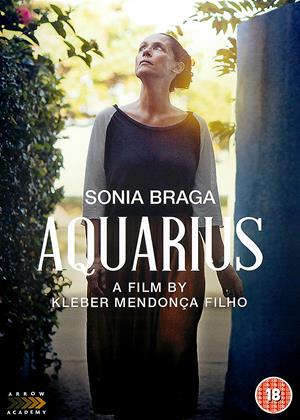 Synopsis:
Clara (Sonia Braga), a 65 year old widow and retired music critic, was born into a wealthy and traditional family in Recife, Brazil. She is the last resident of the Aquarius, an original two-story building, constructed in the 1940s, in the upper-class, seaside Avenida Boa Viagem, Recife. All the neighbouring apartments have already been acquired by a company which has other plans for that plot. Clara has pledged to only leave her place upon her death, and will engage in a cold war of sorts, a confrontation which is both mysterious, frightening and nerve-wracking. This tension both disturbs Clara and gives her that edge on her daily routine.
It also gets her thinking about her loved ones, her past and her future.
Actors:
Sonia Braga, Maeve Jinkings, Irandhir Santos, Humberto Carrão, Zoraide Coleto, Fernando Teixeira, Buda Lira, Paula De Renor, Barbara Colen, Daniel Porpino, Pedro Queiroz, Carla Ribas, Germano Melo, Julia Bernat, Thaia Perez, Arly Arnaud, Leo Wainer, Lula Terra, Allan Souza Lima, Valdeci Junior
Directors:
Kleber Mendonça Filho
Producers:
Saïd Ben Saïd, Emilie Lesclaux, Michel Merkt
Writers:
Kleber Mendonça Filho
Studio:
Arrow Academy
Genres:
Drama
Countries:
Brazil, Drama

The film is very slow and dull. The viewer's engagement with the film probably depends on how you see the protagonist, Clara, a woman in her late sixties. She refuses to sell her flat although she has been offered the market price by developers, and her family try to persuade her to accept the offer. The film meanders for far too long through her uninteresting mundane everyday life. The developers seem pretty benign although there is a slight rise in tension towards the end. There are a few short gratuitous explicit, tacky sex scenes, thrown in for no particular reason, including some with a male prostitute and Clara.

Gave up half way through - Aquarius review by RP

The film is slow and disjointed. We tried hard to stick with it but after about 45 mins we really had lost interest. Maybe we should have persevered but life is too short to be bored.

A quality film about The strength of a woman dealing with money gabbing property developer... - Aquarius review by MB

Great subject matter, as are most quality foreign language films. Beautifully filmed, with great empathy for the lady in her role as the central character, who fights against a money grabbing property developer, who wants to buy her apartment, eradicating her her and memories of bring up a loving well adjusted family, so that he could further develop the site on which she lives. So much more depth to this film than the usual sex, violence drugs car chasing superficial American blockbuster drivel contained in that country's pathetic offerings.

Get absorbed into this well made film. It's worth it.

One of the worst films I have ever sat through for its utter lack of talent coupled with poor taste. How anybody could give this film 5 stars is a mystery.

I came to this film after being mightily impressed by the director's debut Neighbouring Sounds and was excited to see where he'd go next. This film covers some similar ground but I found it less successful on the whole.

The film is a character study of a woman who obstinately refuses to leave her housing complex when developers have bought out the rest of the building to make way for an urban regeneration project. The lead actress' performance is mostly incredible and worth the price of admission alone, but the director does occasionally give her the freedom to go way over the top. Without spoiling anything, there is one metaphor hanging over the whole film which becomes far too laboured and kind of spoils the film somewhat. It starts slow, and at 146 minutes I feel it easily could have done with some trimming in the first half.

Still, it's an interesting piece and worth a watch, just lacking the subtlety of his debut.

Aquarius is a powerful cinematic experience on both micro and macro levels as well, featuring few harboring political ideologies that would deter many, piss-off few, and change the ideological stances of – no one. Because let’s face it: those things stay with you for as long as you live and breathe, and no amount of movie ideology would shatter your beliefs, bar none. But anyway, I digress. Aquarius portrays a very real struggle of a very real woman in Brazil, as struggle which is as much psychological as it’s ideological in nature; in fact, this woman battles against everyone, with no exemption from herself too.

The film follows 65-year-old Clara (played by Sonia Braga), who is also a mother of three, as she refuses to sell her apartment despite the urgings of a big real estate company. This is mainly due to the fact that her building is a remnant of a not-so-distant past, which she tries to keep afloat in the back of her head. In fact, by razing/selling this building, she would (potentially) lose the only manner at which she is known, her own identity, and everything (people and events) that makes her to be what she is. Existential dread, anyone?

In continuation, it may seem as if the story is a tad-bit clichéd, and this is true, but only in a manner in which it accompanies a strong middle-aged female which most other features would simply gloss over in a hurry. What’s even more interesting is that Aquarius doesn’t feature any twists, turns, or anything of the sorts; rather, the tension builds up through a slow, thorough, and meticulous cinematography + editing (which are top-notch), like in the scene where the real estate manager and Clara mesh things around a bit a-la John Carpenter style (director Kleber Mendonça Filho’s trademark).

Moreover, the greatest part of the film doesn’t even connect with its main plot. Clara going to parties, mingling with people, striding along with her nephew, talking to folks – it all adds up to the subtlety of her character and helps to flesh it out even more. This is Aquarius’ greatest strength – to showcase how Carla is just human.

The technical aspects of the film are all superb: cinematography is professionally done (unlike most Hollywood blockbusters); sound mixing and music are subtle enough to conjure up emotions without overwhelming the whole narrative over; editing is suspenseful and adds layers of meaning to the narrative, as well as providing grapples to which the audience can hook onto of this exact meaning.

Finally, political ideologies aside, Aquarius is perhaps the greatest Brazilian film in recent years and it would be a real shame if you’d passed this over for a quick fix of another nature instead.