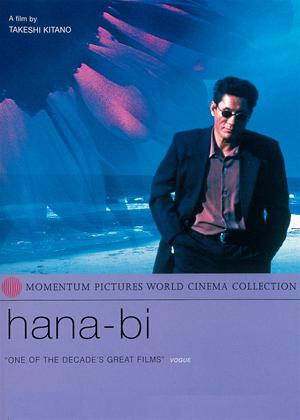 A melancholy and violent masterpiece. - Fireworks review by CP Customer

Written, directed, and starring Takeshi Kitano, 'Hana-bi' is a complex and powerful film revolving around the life of Nishi, a quiet but violent Tokyo cop plagued with bad luck. With his four year old daughter dead, his wife is terminally ill with leukaemia and his best friend paralysed after a shooting; he decides life's too short and quits the force to take his dying wife around Japan hoping he can make her final days the best he can. However, this act of spontaneity leads Nishi to make a series of bad choices, one of which involves borrowing money from the local Yakuza, and every attempt Nishi makes to resolve the problems in his life only drives him deeper into desperation and desperate acts. Overall 'Hana-bi' is a film full of emotion, on one hand the film shows Nishi as a tough, unforgiving and incredibly violent man, while at other times he is a man full of sorrow and sympathy for those close to him, and yet also a man who finds it hard to grieve, who only now realises after spending too much time at work and not enough at home how much he loves his wife. The direction, soundtrack and quality of acting is superb and if you've never experienced Takeshi Kitano's work then 'Hana-bi' is a great place to start.

The style of direction did not appeal to me. There are long scenes of quiet, unemotional ordinariness punctuated with extreme violence. The characters are cold and remote. I was not captured, as a previous reviewer, by any strong emotions. The main character is unlucky but any sense of compassion is lost by the constant use of flashbacks and forwards.

The film is in Japanese. Three characters will have a conversation for a minute and the subtitle will say something like "yes yesterday" What ! How am I suppose to follow that?

Whether this film is good or bad I could not say because the lack of proper subtitles render watching it a pointless exercise. I felt really annoyed that I had to turn it off after 15 mins .

Sort the subtitles out.

Not a Masterpiece. - Fireworks review by DS

Hopefully after Austen Powers came out in 1997, the same year as Hana Bi, Beat Takeshi realised the clunkiness of exposition. If you want to make a deep film on the desperation of guilt, loyalty to love ones and responsibility it does pay not to have supporting characters in full-on exposition but your lead character/actor being paid by the word. Kitano hardly says any dialogue and occasionally nods or looks at people during long stretches, this conveys nothing. In all honesty, I could do that.

Meanwhile Nishi’s devastated colleague, Horibe, thoughtfully explains in some completely natural dialogue what has happened in between his shooting and the current scene, again in full detail, to his best friend and loyal workmate? Then we have the Yakuza explaining that they are the Yakuza and ‘this is what we do’ to themselves in a meeting. That boat just does not float for me.

A lot of the acting looks stagey and stilted and the casual violence and thuggery of the police will not connect with the audience. In fact Mr.Nishi is a psychotic thug who doesn’t speak to his wife and his answer to everything appears to be some extreme violence, in any normal world he definitely would have been incarcerated by now.

The local Yakuza are comically bad and not in the slightest threatening as simple moves or sleights of hand foil them every time or they send one man to get a debtor who has foiled more than one of the ‘enforcers’ multiple times. Then when Nishi comes back to the car on his own, carrying the enforcer's pistol, they let him get in. The whole film is neither thrilling or logical.

The comic aspect appears to be scrapyard storyline shoehorned in so Tetsu Watanabe can gurn it up in a less than subtle comic turn. It also included a confusing, badly edited, unresolved conflict for this character with the ‘dweeby scared’ man, which confused me.

The film plods along implausible for some time until the finale with Mr.Nishi’s former colleagues ‘come for him’ but he begs a few last moments with his ‘suspiciously not in her final weeks’ wife, who incidentally hardly speaks either it must be riotous in their home. Here we get to see what is apparently a demented child running around and around in a circle with a kite that will not fly and then a kite the Nishi breaks.

The final panning shot accompanied by specific sounds is supposedly profound or sad but just made me think Nishi was even more of cock than he was portrayed throughout the film.

The plus points of the film are some of the beautiful Japanese vistas but the minus points are many. The music appears to be from 1970s US crime shows and does not seem to fit what is playing out in front of your eyes, the acting is strange and mainly poor, the editing is almost random and disjointed and everything seems to say, cheap or made quickly.

Many people say this is a masterpiece, which astonishes me, I like Japanese films and there much better made, better acted, thoughtful and interesting films from that nation out there than this.

Masterpiece is being flung around about a current video game. I’ve seen that from beginning to end, it is not, it is full of plot holes and poorly written, so is Hana Bi I’m sorry to say.

The emperor is altogether naked.