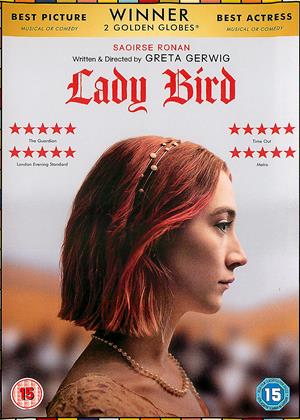 It’s very well done, beautiful acting from all the cast and the movie has a nice nostalgic 2003 feel.

But do I really care that much for details of an American girls problems ?

Sadly no, so the subject matter did not enthrall me but I did appreciate a gem of a movie made with skill and love.

Alright, not sure why the hype - Lady Bird review by DB

Like the previous reviewer, it's a well-acted, O.K film that didn't move me in any way.

Very light story where not much actually happens, very subdued.

Had a lot of buzz and rave reviews but I still cannot put my finger on why.

Nowhere near as good as other films of its ilk, like Whip It!

I normally enjoy "light-touch" films and yes, moody women films too, but the film never grabbed me once. The somewhat interesting evolution of the characters, the great acting, particularly Laurie Metcalf, but I just found this a chore to get to the end.

I should really like this film, it's the sort of film I like. But I was just kind of bored.

The storyline to this film is pretty light and basic without anything of any real note going on. It’s more of a portrayal of a fraught relationship between a mother and daughter while the daughter is coming of age in enduring the things that come with that time in our lives (relationships, school, college, friends, enemies, etc). It’s a very easy film to watch but I’ve seen much better films of a similar style and concept. It doesn’t leave anything of any note on you. The biggest positive was the sublime acting by Laurie Metcalf as the mother.

I really liked this film. It's funny, moving and insightful into teenage angst and relationships with parents. Brilliantly acted throughout.

One for the girls - Lady Bird review by KF

As insubstantial a film as you're likely to see this year. Twittery dialogue, no story line, teenage angst. One for the girls but the other half of the population will need to find something g else to do.

Worth a watch - Lady Bird review by BE

Enjoyed the movie to a degree. Excellent acting etc but missed a lot of the dialogue as always use sub-titles for American movies (due to unclear speech) - non available

I thought the acting was wonderful in this film, both actresses showing what can be done with interesting material but unfortunately it is just not funny anough. It tries too hard to be quirky and lost my interest as a result. There is a film called Edge of Seventeen which received less plaudits but is a much better film.

Very much Saoirse Ronan's film, and her performance is well pitched and charming enough.

However, pretty much every other aspect of the film is slight and way too whimsical. A big disappointment and full of religious propaganda.

Fabulous - Lady Bird review by AM

This is as good an exposition of the emotions and relationships within a family as I've seen, in particular the mother-daughter relationship which is perfectly played. It probably has more resonance with parents, and particularly parents of teenage girls, but what's wrong with that? It builds slowly but carries a real emotional punch at the end. One of the best films of the year and deserving of all the plaudits.

Not for me - Lady Bird review by Timp

I remembered there was a lot of buzz around this film at the time of it' s cinema release I am now slightly mystified why that was.

Saoirse Ronan is a gifted young actress but this film was not for me. I've enjoyed coming of age films in the past but this seems to deal with modern issues like a box ticking exercise. There are funny moments but overall it didn't make a mark.

Lady Bird is easily one of the most adorable coming-of-age teen dramedies simply for how every character feels like a human being and not an obstacle. We could expect that much dimension from our titular teen, but it’s surprising to see this much genuine character out of the mother, father, teachers, principals, and even the fat friend. It’s the type of film where you just want to give everyone in it a big hug, ensuring them that they’re doing the best they can when life seems daunting.

It’s for this reason why Christine "Lady Bird" McPherson (Saoirse Ronan) never feels like a bad apple with her troublemaker tendencies. The principal of her Catholic school knows this and treats her more with an understanding smile whenever Lady Bird is called down to her office; even the principal can delight in the rather innocent prank of the student decorating the back of her car with “Just Married to Jesus.” Lady Bird has grand ambitions for her future. She wants to go to a college in New York, but her terrified mother (Laurie Metcalf) pushes her away from such ideas. Her father (Tracy Letts) is less of a fighter but secretly tries to help his daughter for her sake.

While she tries to make it into her desired college behind her mother’s back, she kicks back with her friend Julie (Beanie Feldstein), hanging out in between classes to talk about drama club and the tantalizing prospect of losing virginity. While Julie fancies her math teacher, Lady Bird’s crush is a bad boy played by Timothee Chalamet. We already know he’ll break her heart but watch her flying towards this mistake as all youth do when her lies of college applications and home address come to bite back. That’s what you get in a John Hughes style drama that wraps you in the warm embrace of likable characters and then tears them down for the colder clasp of life.

Every corner of Lady Bird holds some pocket of humanity and love. The best example of this is with the drama teacher of the Catholic school, played by the effortlessly charming Stephen Henderson. He seems so full of humor and understanding, which we soon learn through small clues is a mask for his deeper sadness of losing faith in one’s self. To prep his class, he plays an acting exercise of trying to make yourself cry and seeing who can do it first. He wins every time.

The film is rather short for its material but makes great use of its time. There are small scenes which zip by quickly and still paint a profound picture of Lady Bird’s life. On the day she turns 18, she stops by a convenience store to celebrate. She buys a pack of cigarettes, lottery ticket, and a pornographic magazine. She notes to the clerk that she just turned 18 and he’s not as enthused. Cut to her smoking and reading porno in the parking lot, a brief and to-the-point moment of adolescence and growing up, all within a scene that’s less than a minute long.

Lady Bird’s story takes place in 2002 but it’s a tale so relatable in its characters and emotions it could easily have been told a decade later. Greta Gerwig’s spot-on direction resonates well enough that teenagers and parents alike can relate to the plight of a teenage girl growing up in the most awkward, tough, and exciting of times. It belongs among the ranks of such films as “Pretty in Pink” and “Adventureland” that treat adulthood with real drama and great fun.