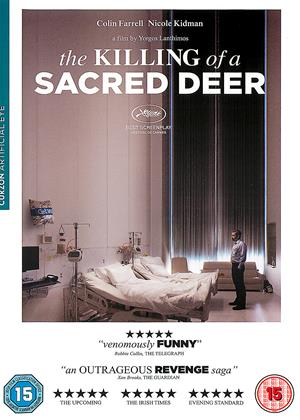 Rent other films like The Killing of a Sacred Deer

Reviews (23) of The Killing of a Sacred Deer

Arty Rubbish - The Killing of a Sacred Deer review by JD

I hated this movie. The story was stupid. The acting was very wooden.

If I could give it zero stars I would.

Don’t waste two hours of your life on this movie.

You have been warned !

13 out of 22 members found this review helpful.

Totally dull - The Killing of a Sacred Deer review by CM

I've seen worse .... but not normally with two such strong leads, the story is far-fetched and totally bizarre. I kept hoping it would get better but the longer it went on the more insane it became ....

I would deter anyone with a modicum of intelligence to give this a very wide berth ....

11 out of 20 members found this review helpful.

If you have already seen 'The Lobster' you will know and understand the pace of the movie already.... If you haven't then its pretty Slow moving, with some very strange Quiet Acting, almost as if the Cast were under Hypnotism . exterior to the enveloping story.

An Odd story slowly unfolds and a Very Difficult Decision must be made to save the lives of a Family.

Powerful and Shocking and yet ...... bizarrely not.

well worth more than the one viewing .

An odd mix of the tedious, the sinister and the bizarre. Nicole Kidman was in her element! Unconventional, odd plot, quirky dialogue relentlessly low key. Will be one of those love/hate films I suspect. Note, you'll need patience to get past the first 40 minutes or so.

Not Good - The Killing of a Sacred Deer review by IG

A film of two parts: The first third quite expertly draws you in, is intriguing, builds anticipation for what is to come, thereon in, it becomes increasingly ridiculous, drawn out and boring. Having wasted two hours of your life watching this rather odd drivel you may like me feel very uninspired and rather annoyed at yourself for not turning it off way before the end. The moral of the story, decent actors and slick production do not guarantee a watchable film.

Though no gore fest or slasher flick this is very much a horror film. It starts off quite dull as others have pointed out but then you notice how much it references Stanley Kubrick's The Shining and realise this is better than you first thought. By the end I was engrossed in foreboding that had taken over and really enjoyed it. It's not mainstream fodder and takes some thinking but definitely a great slice of modern cinema.

From the opening scene, there is a disturbing quality to this film, which is heightened by the claustrophobic camera shots, sparse dialogue and eerie sound track. The acting is good but the film increasingly becomes unbelievable and silly.

Celebrated Cincinnati heart surgeon Steven Murphy (Colin Farrell) has struck up an odd friendship with 16 year-old, greasy haired Martin, (Barry Keoghan). As we discover why, Murphy's troubled past is revealed and he and family thrown into an escalating, existential crisis.

The line between saving lives and ending them becomes increasingly faint (think how a heart patient is butchered on the operating table).

As with all of Greek director Yorgos Lanthimos's films, the tone moves, often in the same scene, from puzzling to deeply unpleasant, from horror to farce, never allowing the audience to settle. Dialogue, often seemingly pointless or trivial (the water resistance of a watch, for example) is clipped and expressed almost blankly by the actors: this sense of the characters' deadness is perhaps over-obvious.

Martin, a mixture of vulnerability, manipulative evil and spaghetti-sucking goofiness (a cousin, perhaps, of The Children of Dynmouth's Timothy Gedge) is played quite brilliantly by (the 25-year-old) Keoghan. Nicole Kidman, her Stepfordian perfection weirdly unchanged by time (and so great casting for Lanthimos), plays Anna, Murphy's wife and co-participant in their doctor-patient boudoir antics. The film borrows its empty, oddly lit hospital corridors from David Lynch and certain scenes, for example the Murphy's youngest son Bob undergoing an MRI scan, are reminiscent of The Exorcist. Occasionally you wish Lanthimos would knock back the archness (The Lobster suffered badly in this respect) but his idiosyncrasies continue to offer strong meat in contrast to the vanilla, fat-free milkshakes of Hollywood.

Un - The Killing of a Sacred Deer review by CW

Don’t normally find a need to give praise to Nicole Kidman but she’s probably the best thing about this movie!

Became increasingly disturbed the longer I watched and in the end found the whole experience unedifying, uninteresting, unentertaining, unpleasant and quite a few more ’uns’, the list is un...neverending.

just wasted 2 hours of my life watching an awful film

Will Colin Farrell ever make a decent film worth watching?

A seriously bad film, but at least they didn't kill the dog. Usually, when there is a dog in a film, I think it's going to die. Not in this film, the dog lived. You only get a brief glimpse of it, but at least it's alive. Oh and there was one funny moment, when the coulpe have sex and she has to pretend to be under general anaesthetic. That was mildly amusing. Apart from these two highlights, it is relentlessly boring and nonsensical.

There’s an intoxicating insanity to the assembly of Killing of a Sacred Deer that dares you to define within its haze of a family nightmare. The less observant will see only wooden acting and random acts with no concrete explanation for why Colin Farrell has strange conversations with Keoghan. Look a little closer and you’ll find something so twisted and perplexing in its psychological labyrinth of terror. I don’t want to pull out that pretentious line about the film being too smart but I will say it never serves predictable or easy answers, pulling the rug out from the audience just before they think they’ve cracked Yorgos Lanthimos’s puzzle.

Farrell plays Steven Murphy, a heart surgeon with a wife and two kids. When not performing surgery or spending time at home with the family, he has been secretly meeting with Martin Lang, the son of a patient Steven lost years ago. Their secrecy may start making the wheels turn in your head about what they’re up to and what exactly is the subtext of their confounding conversations, riddled in emotionless presentations. Are they having an affair? Are they planning something? What it turns out to be is so surreally creepy, almost aloof in its physical form, that I dare not spoil how this all unfolds, if only not to open the meaty can of film theory just begging for the top to be popped.

If you find yourself halfway through the movie questioning the specifics of Martin’s true intent or how its possible for what befalls Steven’s family, pump the brakes on your analysis. It becomes clear from the very first shot that the movie is not going to spell out much, evident from the classical music over graphic footage of organs. The film is ultimately about the deterioration of the family and the overwhelming guilt that hides deep under the facade of quiet stability.

An art film? In a sense, yes, but few art films come with a driving sense of how much further a plot this dark and ambiguous can plunge. Sure, in the first act, we’re on the edge of our seats trying to decipher what Martin is doing, why Steven continues to listen, and why Steven’s son won’t eat. Consider how when Steven’s son is submitted for medical testing for his illness, nobody can figure out what’s wrong with him. Science can’t explain it, nor can it explain the story. But the otherworldly drama it weaves is so intoxicatingly brilliant that there was never a dull moment.

There are still a handful of moments that don’t quite resonate as they slide towards the creepy with a tone that borders on comedy. In a scene where Steven tries to connect with his son to get him to eat, he tells him an awkward story about masturbation without a trace of shame or gentility. Another scene has Martin chewing off his own arm and directly addressing the metaphor he is trying to make, making me almost question its addition as either commentary or satire. And there’s an uneasy bit of laughter in the most peculiar of sequences where Steven sets his family up in a circle, drops a bag on his head, and spins around for who to shoot as though he’s playing Wheel of Fortune.

Even though I adored the film’s nature of continuously turning up the surreal while the tension mounts, I’m willing to admit it’s not everyone’s cup of tea. It’s bitter, uncompromising, unhinged, strange, direct, artsy, and brutally blunt. But that’s just the way I like my psychological horror, refusing to exposition itself into boredom or tie a neat moral bow onto its end. No sugar, I like it black as night, to the point where explaining the title is subject to debate in its meaning.