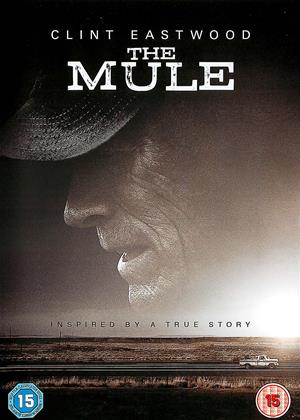 Eastwood makes this a good watch - The Mule review by CS

Based on the true story of aged drug courier Leo Sharp (a World War II veteran who became a drug courier for the Sinaloa Cartel in his 80s), Clint Eastwood gives an excellent performance in the lead role. The story is simple and effective but while Eastwood is excellent, the back story involving a mostly alienated family is scripted and acted in a way that seems somewhat contrived. Still well worth a watch - and there won't be many more films with Eastwood as a star.

Clint Eastwood is no kid these days and it's been 40+ years since he was in all those Westerns I grew up watching but I think he's still good even at his more mature age. (I may be slightly biased as I am a huge fan of pretty much everything he has ever done!).

This film is good not just because of the story which is darkly comic at times, dramatic and overall bittersweet but also because although there is some action it isn't an action film so you can see how aging Eastwood really can act and judging him on his now more subtle acting abilities.

It isn't the classic of an Unforgiven or even the more recent (but still excellent) Gran Torino but there's enough of a storyline here with some big name supporting actors to still make this a really good experience in my opinion.

I laughed a bit (and cried a little), overall I enjoyed it. Oh yeah not only does Eastwood star in it - he directed it too...and he's nearly 90!

Worth Watching - The Mule review by KB

I would give this 3.75. Fairly entertaining , mildly amusing but also with a heart. Overall it was a good watch , probably a bit better than I was expecting and i enjoyed it. You can't help rooting for Clint .

Clint still walking about. - The Mule review by NC

Gave it 3 for old times sake. Long way from Rowdy Yates now. We all going in same direction, but not everyone gets millions of dollars for just being vertical.

Still got it - The Mule review by KF

Well, Clint may be into his 80's now but he's still got a charisma. The film however is very one dimensional and linear, mostly the one same repetitive theme throughout except for the scene with his ill wife which I thought was out of place and just padding to add some extra minutes to the film.

Not bad but abit boring - The Mule review by MH

Not what I expected, but it was ok

My Dad loves Clint Eastwood maybe he would appreciate this film more but not sure.

A film you will remember....great film. The Mule. - The Mule review by TR

When you have gotten over the shock of seeing Clint Eastwood in this really aged role, you can sit back and enjoy the film Typical of the drug era, unsophisticated, brutal and unforgiving. Eastwood totters on as an initial innocent flower loving old man who gets the opportunity to make a fast buck. Being a family man whose family has lost interest in him, down on his luck, no money, makes him an ideal candidate as a drug runner.

The film starts a bit slow, then starts to evolve as Eastwood settles into the role and we are introduced to more film characters. Some of the locations (drug lord house) are amazing with some good quality filming. The acting overall is good with some suttle humour from Eastwood.

His characterisation of the part is really good, believable from the start, a great performance. There is little violence, but some emotional scenes towards the end of the film. Not really my sort of film, however i could not stop watching and found it to be excellent and a fines testeament to possibly Eastwoods last film role. sayonara

Another Eastwood Epic - The Mule review by JT

Clint Eastwood does it again with another fine film. He's getting very good in his cantankerous old timer roll he seems to have adopted lately. Very enjoyable.

Since the success of Breaking Bad there have been a plethora of TV shows and films about respectable citizens turning to crime to get out of situation that are not their fault. The Mules is no different. Easily watchable and easily forgettable. It would be nice if the cartel members were given more character instead of the stock henchman/El Boss/ruthless sidekick no1.

well worth watching - The Mule review by OP

Clint Eastwood in a fantastic actor, and a brilliant director.  This is a lovely film, full of gentle dark humour, very well cast, wonderfully acted and of course brilliantly directed

Clint Eastwood directs himself as an old-timer who, to make money, starts working for a drugs cartel, ferrying packages around in his beat-up old truck. He’s a complete innocent, oblivious to the increasing peril he’s in as the gangsters and the cops (led by Bradley Cooper) close in. He looks so fragile that you’ll be rooting for him all the way as we follow his trips through the colourful desert landscapes of the American South-West.

If ever there was a warm-hearted thriller, this is it. Even approaching the age of 90, Clint knows what to do with a camera and how to make an intelligent and enjoyable film. Expect no fireworks, but if you liked Gran Torino, you’ll like this.

DVD Xtras Fascinating Fact: All the clothes Clint wears are from the various movies he’s made over the years.

Clint Eastwood’s filmmaking prowess is still very vibrant at such an old age but his weary bias is starting to show in problematic pieces throughout his work. In his previous meandering picture of The 15:17 to Paris, there’s a pointless scene of our American heroes giving goofy looks to some snotty French stereotypes as well as some mutterings about public education being too PC and foreign people being dirty. The Mule once more confirms that a lot of Eastwood’s conservative craziness is still amplified in his work where it becomes difficult to determine how much of his own role is either supposed to be a character of dated thoughts or if Eastwood really does believe black people should still be called negros. I thought that rambling racist persona was just a character in Gran Torino. Now I’m not so sure the way Eastwood doubles down on the crazy conservative in this picture.

Eastwood plays Earl, a horticulturist war veteran who lives a bitter life. He enjoys selling plants but despises selling at conventions of an automated technology. He has shunned his family who feel like he is never present in their lives. Oh, and he’s wicked racist, never missing an opportunity to call a Mexican a beaner or a lesbian a dyke (oh, but don’t worry, the lesbians said dike first so it’s okay that he says it, right?). He has fallen on hard times. Unwilling to reshape his business, he seeks out other means of making money. He falls into an operation of intitially being told by some gangsters to drive some bags from point A to point B. It seems simple enough. They wanted to secretly stash some stuff in his car’s compartments but, whatever, the money is good.

But then, as though this were a bad King of the Hill episode, Earl discovers that the bags he are transporting contain drugs! How could this be!? And he discovers this just as a cop pulls him over to ask what is in his trunk!? What a tense situation to be in. Now Earl must try to keep the drug shipments going while trying to find a way out. Yet he never feels as though he is in too deep or questioning too much of the errors he has made. Even when dealing with Mexican cartels that could gun him down, he still diverts off course and makes more racist jokes. He seems to want to do the right thing but always with an awkward and unaccounted for narrow view on the world.

Watching this kind of film is awkward with how Eastwood reacts to everyone and how everyone just kinda accepts it. Eastwood makes several rants about how smartphones have damaged the world he once knew but rather than call him out, everyone just sort of smiles and shakes their head, possibly muttering “okay, boomer” under their breath. He makes a racial slur every now and then others will either ignore it or gently try to explain you don’t use that language anymore. I’m sorry but I find it very hard to believe this old-timer could stroll into a Mexican cartel to call them all beaners and then make detours during his drop with little more than a stern talking to. Everyone in this picture respects their elders WAY too much. Oh, and he’s a Veteran so, you know, support the vets. Oh, and support the police, as Eastwood states several times.

The Mule is just downright weird. It’s as though Eastwood got his hands on a Breaking Bad style script and coated in a thick paint of conservatism to make the film pleasing enough for his core demographic of Americans 70-100. Things just work out far too well in this scenario that there’s more melodrama than tension and a lack of genuine concern when we know Eastwood will make it out alive. He’s still got a lot of young people to yell and sling slurs at.