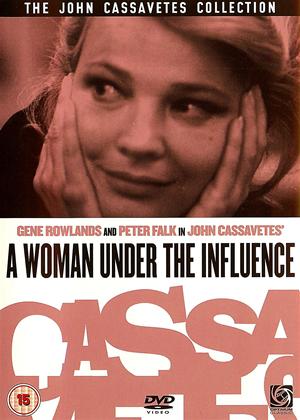 Rent other films like A Woman Under the Influence

Cinemadiso's 1970s In Films Vol. 2
14 films by cinemadiso
Nogginstem's Favourites
76 films by nogginstem
Frankie's 1001 Movies You Must See Before You Die
982 films by frankie
marco's Favourites
83 films by marco

Reviews (1) of A Woman Under the Influence

Made at a time when mental illness was more stigmatised than it is now, “Woman under the Influence” is far from being a period piece. The question of how we should treat mentally-afflicted people with compassion while preventing them from harming themselves and others – especially when so many cases resist an easy diagnosis or classification – is of ongoing relevance. People are terrified of being “sectioned” and drugged up, or having their loved ones subjected to this treatment . . . but what if the alternative is even worse?

Mabel is a married mother of three whose eccentric and uninhibited behaviour, not to mention her libertarian attitude to child-raising, have a habit of landing her in hot water. On one occasion, she treats a conservative neighbour, who has brought his own offspring round for a homework- and play-date, to a rendition of “Swan Lake” in the backyard – his bafflement turns to fury when he ventures upstairs and finds that the unsupervised children are playing dress-up and one of the girls is running around naked. Nick loves his wife the way she is and has no desire to suppress her individuality. But Mabel’s condition gets to the point where there is no alternative but to have her committed. At work Nick is tetchy and defensive about his wife's state of health and lies to the children about the reason why she's in hospital. He does his best to adjust to being a single dad while Mabel is institutionalised, but his own style of parenting turns out to be an odd mix of authority and anarchy.

The film steers clear of trite sentimentality and pop-psychology, and even more notably it avoids racial and class stereotypes and even subverts them to a degree. In Cassavetes’ world, working-class people still suffer from “middle-class” problems, such as uncertainty about how to behave in social situations. For instance, there’s the scene where Nick has prepared a big homecoming party for his wife, but belatedly realises that someone who’s recovering from a nervous breakdown will feel overwhelmed by that much company. Nick’s ethnically-mixed (but mainly Italian) colleagues are portrayed with dignity – no signs of racism or "toxic masculinity" here even though it’s the South in the 1970s – and I like the way that Nick effortlessly switches between brusque and affectionate without appearing to be two different people. Some viewers might find fault with the lack of significant female supporting characters, but I assume that Cassavetes wanted to emphasise that work was an important part of Nick’s sense of identity, being the family’s sole breadwinner, while underlining the relative isolation that Mabel experiences as a suburban housewife.

A heartbreaking yet life-affirming film that celebrates the resilience of the nuclear family and the value of love within marriage, which, while it may not necessarily conquer all, at least ensures there is a well to draw upon when the castle is under siege.

Notable also for the blend of expressive camerawork and naturalistic dialogue, which seems to be a trademark of this director, and very strong performances by the two leads, Gena Rowlands (who teamed up with director in several other films) and Peter Falk.