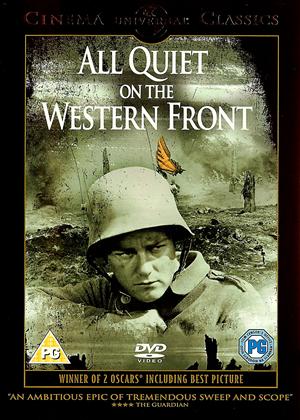 Rent other films like All Quiet on the Western Front

Reviews (1) of All Quiet on the Western Front

A Lesson Never To Be Learned. - All Quiet on the Western Front review by NC

I so much wanted to enthuse and give this five stars. If any film, because of the right messages, deserved to be 'great', then this is one. And indeed there are great passages here:- the opening is spot-on, with a shameless teacher rallying his pupils to abandon learning, and join the slaughter (don't think, just die). The main character,Paul, sees the same teacher spouting the same slime, four years later, and sees it through completely different eyes, for what it is. A scene in a crumbling dug-out, as the young recruits await the order to fight, some of them already suffering mentally from the constant bombardment. A scene in a hospital, where the mortally wounded are taken to 'the dying room', and their vacant beds are remade in swift, clockwork fashion. But it is the battlefield scenes which stay in the mind. There is depictions of such chaos and confusion, and such horror as bodies are mown down and blown apart, that it is hard to believe first of all it was made in 1930, and secondly that such scenes of barbarity could ever be rendered more powerfully.

If only the script and the acting weren't so abysmal. There is one scene where Paul stabs a French soldier who has fallen into the same foxhole. Thereafter Paul, in anguish, desperately tries to aid the dying man. "I want to help you", he shouts. Yes, we can see that, we do not need to be told. It's done too melodramatically. How much more powerful would the scene be if no words were spoken - just Paul frantically trying to stem the bleeding and find water? So many scenes which presumably are there to depict life outside the trenches, are a waste of time because they are so badly done.

It's such a shame. So much is in place to make this one of the most memorable anti-war films. So much so, in fact, that Lew Ayres was to become a conscientious objector in the Second World War, partly through his experience in making 'All Quiet'. But the words the actors are made to utter just can't be forgiven, nor the exaggerated manner in which they say them.

Full honours to anti-war films set in the First World War go to later efforts like Richard Attenborough's 'Oh, What A Lovely War' and Christian Carion's 'Joyeux Noel', but for all that 'All Quiet' certainly puts to shame the sick John Wayne type of film about 'heroes'. There are no heroes here - just boys impelled to enlist, dying in mud and rain and blood, for a reason they can't figure out.