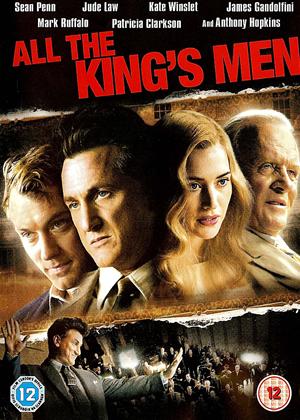 Story of corruption in American politics (nothing new there then!) but set in the 1950's in Louisiana. It traces the true life rise to power of an ordinary 'hick', played brilliantly by Sean Penn, who appeals to his people to win the election of governor by a landslide. He is supported by a journalist from a wealthy, priveleged background (a good performance from Jude Law). I didn't know the story but followed the film OK. Anthony Hopkins provides further acting talent, although Kate Winslet is really wasted in her role as she appears to have very little to do other than provide eye candy.

This is a Greek tragedy of a melodrama, set against the background of corrupt early 50s politics in Lousiana.

A hick politican - the Sean Penn character - rises to the top in an unconventional way, and has some choice lines in the script too, as power corrupts him from an honest John into the ultimate cynic.

The main character, however, is the Jude Law journalist assistant to this man, who is a bit like Nick Carraway to Gatsby (and probably narrates the book this comes from).

There are some hard-to-believe plot devices, but having said that, if you like a melodramatic Greek tragedy then this is for you anyway. It is scathingly cynical about politics - but then who isn't these days?

An all start cast here too, with Tony Hopkins playing a rather obvious 'godfather' to the boy...

Worth a watch and exciting viewing - but put the subtitles on if you want to catch all of the scripts great one-liners and exhilarating cynicism. 4 stars.