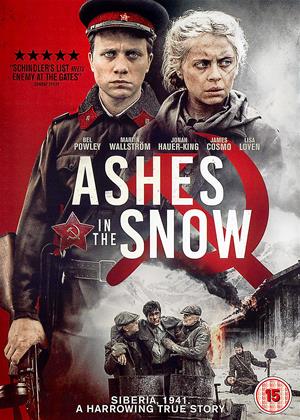 Synopsis:
"Ashes in the Snow" is a harrowing true story following a 16-year-old girl, who is deported to Siberia, during the Soviet occupation. Siberia, 1941, Stalin's henchmen violently invade and ruthlessly deport Baltic families from their homes. 16-year-old Lina (Bel Powley), along with her mother and younger brother, are exiled to a soviet labour camp, while Lina's father is put into a prison camp...Lina fights for her life, fearless, vowing that if she survives she will honour her family, and the thousands like her, by documenting the experience in her art.
She risks everything, hoping that her messages in art will make their way to her father's prison camp, to let him know that his family are still alive. A beautifully executed, yet heart-breaking, captivating and eye-opening drama. Unveiling a forgotten part of history, in a way that makes you experience the despair and shocking conditions of war.
Actors:
Bel Powley, Sophie Cookson, James Cosmo, Peter Franzén, Jonah Hauer-King, Martin Wallström, Sam Hazeldine, Lisa Loven Kongsli, Adrian Schiller, Timothy Innes, Tom Sweet, Dolya Gavanski, Ieva Andrejevaite, Nadja Bobyleva, Aiste Dirziute, Sarah Finigan, Greg Kolpakchi, Ramunas Rudokas, Gabija Jaraminaite, Martin Wallstrom
Directors:
Marius A. Markevicius
Producers:
Prithvi Chavan, Chris Coen, Marius A. Markevicius, Zilvinas Naujokas
Writers:
Ben York Jones, Ruta Sepetys
Aka:
Between Shades of Gray
Studio:
Signature Entertainment
Genres:
Action & Adventure, Drama, Romance

Reviews of Ashes in the Snow

Often times in media the whole picture of grand events tends to lose focus, especially for something as sprawling and ever-infectious as the horrors of World War II. There’s no shortage of holocaust film vying for attention and much is due to all of them. It’s why it’s a bit dismaying to find a picture such as Ashes in the Snow, which sheds light on the Baltic region’s horror of the Stalin regime but doesn’t quite have the gravitas to lift it out of bullet points of a standard holocaust picture. And I know how cynical that may sound, especially if not taken with the separation of the true events from the movie itself. But it’s hard to embrace such a picture that keeps taking you out of its turmoil and importance.

It’s based on the semi-biographical novel by Ruta Sepetys entitled Between Shades of Gray, renamed for obvious reasons. The story follows the teenager Lina (Bel Powley), hoping that 1941 will be the year her art aspirations take off. But the invasion of the Soviet secret police change these plans. They force their ways into her home and before she can fight back, she has been deported with her family to Siberia. During this deportation, she is separated from her father who is instead sent to a prison camp. Thus, Lina struggles to continue fighting back in her own artistic way that she hopes will give her one last goodbye to her father.

I mentioned that Ashes in the Snow does proceed along a similar track as other holocaust pictures but not the good ones. For one, it seems distant from the true draw of the picture. It would seem as though Lina would be the one we follow through a first-person perspective, yet there are several scenes that shift towards her abusers. This shifting in the shots may have the intent of trying to show the sinister nature of the persecuting villains, but it robs a certain personal edge that could make the film shine. It makes the picture more ubiquitous in its anti-war message, feeling more vague than it should be.

Second, the production feels held back to fully immerse us in this scenario. I’m not just talking about sets and lighting, which are pretty par for the course, but the performances as well. The dialects make it quite clear that this was more of a Hollywood production that tries to gussy itself up for more American audiences, shooting for more of the melodrama while cashing in on the New York Times best-selling recognition. Every scenes seems to have a small bit of off dialogue that always made me question the picture in ways I really didn’t want to scrutinize.

What’s make that all the tougher to dunk on is that most of the film intended purposes of showcasing the horrors of war and regime changes is present and palpable. The scenes of rape and graphic violence as families are separated during a dark time of history is horrifying, including a scene of a baby being slaughtered that will no doubt haunt audiences for some time. The hopelessness of the situation also feels real and sobering, providing a sort of uneasy feeling that shouldn’t be forgotten.

Ashes in the Snow is not the worst of these kinds of pictures given its intent and its emotional effectiveness. There are a few inaccuracies to be sure but that’s of little consequence to the broader picture. It is for this reason that I’m only reluctantly unable to better appreciate the film as more than just a somber war picture for being so common among its ilk. It shouldn’t quite be that but we shouldn’t stop being made aware of it either. It’s a quandary of a picture.