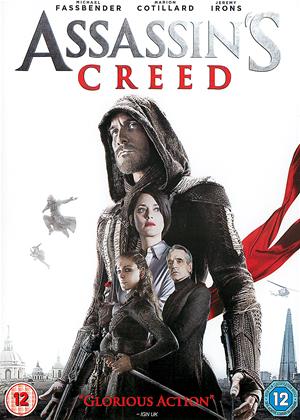 I was hoping that this would be the first good movie based on a video game but sadly not. It's frustrating how badly implemented it is, as the idea has real potential for a movie, it even has a decent cast.

The main problem is they spend way too much time in the "real" world rather than concentrating on the exciting medieval world of assassins and templars. Worse still, when there is action in the medieval world, the film feels the need to constantly remind you it's not "real", with regular flashback type scenes of the main character in the "real" world strapped into the animus machine. It completely breaks the immersion of the scene and is totally unnecessary.

Another incredibly annoying aspect is the amount of dialogue there is in Spanish with no subtitles. Most, if not all of the dialogue in the medieval world is in spanish and there's no subtitles at all, so you just have to guess what's being said.

I could forgive the fairly ridiculous plot, and the asthetic of the medieval world is good, but the major flaws make this one of the most disappointing movies I've seen in a long time.

Such a shame - Assassin's Creed review by PC

I really thought the director and actors that made Macbeth such a good film would bring the Assassins Creed game series to life on screen. Unfortunately, their talents and my time was wasted.

The plot is ludicrous but you would let it go if it was visually as stunning as the trailer led us to believe. The main problem with the action scenes if that they intersperse the flashbacks with the present day, so basically we see one Michael Fassbender fighting for real and the other shadow fighting at the same time. This means you cannot fully be involved whilst it keeps cutting from one to the other.

The ending is also a big letdown where everyone seems to have decided it really wasn't worth spending any more time on the whole thing.

Ye Gods, this was awful - Assassin's Creed review by JS

I missed this in the cinema, but I've two friends who independently went to see it and told me that they left long before the ending. I kind of assumed that this was just because they hadn't played the games, and didn't 'get it'.

I've played all the games, and while I love the historical aspect and the gameplay, the modern sci-fi element is a bit naff in the games, as if the writers have no real clue what to do with it.

And then there's this... I think they found a way to take out everything that was even slightly interesting about the games, and make what was left even more boring.

Movies based on games have a bad rep, but this one set a new low. Unless you have no paint that you can watch drying, you have better things to do with your time than watch this tedious mess.

Sorry to have to say I feel asleep numerous (12+ times) watching this on 3 different occasions. I guess I wanted to like it. But I just couldn't. Dull, dull, dullski. I played the game. It's okay, but a bit dull also - I didn't like the animus feature on the game either. The best aspect was evading people so that you could escape and go back to the shadows again which to be fair was the one thing the film got right. Also indiscriminately killing anyone you like is always amusing to some degree (sorry!)

It has been badged as an action film but you can only watch so many hand-to hand fights and impalings all with almost non-existent blood letting before it all gets a bit tiresome and really there is not much story to speak of.

Waste of decent acting talent as there is no doubt that Fassbender in particular is an amazing actor re: Eden Lake and recent Alien franchise.

I can't endorse the film. If you do see it, you will never watch it again. And for a run time of 105 mins you could do something better with your time...

Based on an adolescent killing game, Assassin’s Creed has a premise and plotline that are pure hokum. Michael Fassbender is a descendant of a 15th century Spanish assassin and is able to regress to that time to find the Apple of Eden, which contains the genetic code to free will. Yeah, right.

Get past that and any cinema-lover is in for a treat. As an action-adventure film it’s a quantum leap better than the comic book franchises that disfigure modern multiplex cinema. With style to spare, it’s beautifully filmed in real-time in real locations with swooping drone and wire shots. The wirework action would not look out of place in Crouching Tiger Hidden Dragon and there can be no higher praise than that.

Some of the world’s top parkour and slackline experts were recruited as stuntmen and real locations were used instead of cgi to enable the action to be captured in-camera rather than in post-production. This gives the film an epic quality and a thrilling realism missing from Marvel-type franchises. A kinetic chase over the rooftops of Malta is worth the price of admission alone. A mention also for the evocative electronic score by director Justin Kurzel’s brother Jed, which adds to the mystical atmosphere.

Ignore the plot-bound critics and gameboys who judged the film on content alone. It may be nonsense, but it’s pure cinema. It’s a film to lose yourself in, to wallow in the images, the score and the mystical ambience. Even the DVD Extras, rarely mentioned either by professional critics or amateur reviewers, are a cut above average. They include an exciting feature on the location stuntwork that gives an insight into why the action is so compelling. Watch and wonder.

What a stupid story this is , just based on memory flashbacks and reliving them through technology . Vert disappointing film this was.

Not the Best - Assassin's Creed review by JW

I found this film rather slow to start but the action did pick up later. The main roles were well acted but still something was missing. The film did not keep my attention as much as I had expected it to.

Assassin’s Creed seems to be aiming to be the most confusing video game movie ever made. There’s a perfect moment in the movie where Michael Fassbender’s character smirks sorrowfully and mutters “What the f**k is going on here?” It was a question that I had as well the way I couldn’t make heads or tails of a plot that is perhaps the most convoluted of all video game adaptations. That look of confusion on Fassbender’s face almost had me questioning if that was acting or if he really was confused about what was going on in this script.

I don’t even know where to begin with such a laughably bad movie. Let’s start with the MacGuffin, as those are usually pretty hilarious. There’s an ancient relic known as the Apple of Eden, a mechanical fruit (I suppose) that contains the secret to controlling humanity’s free will and taming violence. How does that work? The movie is too busy piling on the ill-defined story and action elements to be bothered with such questions.

A secret league of assassins in the 1400s has hidden the Apple and now a group of Templars in the modern 21st century want to find it. And this is where the movie goes off the rails. The Templars have developed a machine that can use “DNA memories” to allow the assassin descendants to see what their ancestors experienced. Did I say "see"? I meant be whipped around a room with knives in your hands in the world’s most expensive virtual reality video game. Why must this machine whip the descendants around the room? The answer is the same reason for everything in this movie: Because it looks cool. Or at least the filmmakers think it does.

There’s an A-list cast assembled for this production, but they’re working with the most mediocre script and passive of direction. Fassbender plays the descendant of an assassin leader that has no character outside of being confused before turning into the bland action man that quickly masters the art of combat (it’s apparently in his blood). Marion Cotillard plays a scientist that takes a liking to Fassbender’s character, but her character is so poorly written that her actual defense for her work has her stating, “I’m a scientist” (you know, in case you forgot). Jeremy Irons could have brought some classic acting charm to the role of an evil CEO, but he’s so bored and uninterested in this plot that I wonder if he can comprehend even a third of the ridiculous plot.

The action scenes, most of which taking place in 1400s Spain, could have been the saving grace for the picture. They’re certainly staged well for plenty of roof jumping, horseback chases and close-quarters combat, as well as setting a record for one of the largest stunt jumps in cinema history. But the camerawork and editing of these scenes render any cool factor to these sequences moot. I once more found myself in a state of confusion during these chases and fights where it’s hard to associate the characters with the locations in a blur of knives, arrows and swords. Even the more tame action sequences that don’t rely on much movement still have a lowered level of intensity, as in a scene where Fassbender slits the throat of a lead baddie in one of the most boring throat-slashings I’ve ever seen. How can a movie have this much violence and still be a dour and boring snooze fest?

We should be feeling something for the other assassin league prisoners that eventually join forces with Fassbender, but there isn’t much of any character interaction to warrant such comradery. The only scene Fassbender shares with the prisoners is in one-sided conversations and blank stares in the cafeteria. Oh, and I guess you’re supposed to care about these characters when some of them suffer tragic deaths. Rest in peace, random prisoner who gave Fassbender an odd look.

Assassin’s Creed is a special kind of bad movie in how incomprehensible it is on every level, from its laughable premise to its ill-thought technology to the punishingly dull atmosphere of the unexplained. One could write this off as a studio meddling with a video game property, but this production was co-produced by the video game studio Ubisoft. Between this and Blizzard helming the dismal mess of Warcraft, it’s clear that even the companies conceiving the video game properties are not adept at adapting their own properties for the big screen. There were many fans of the video games hoping with the talent involved that Assassin’s Creed could break the curse of bad video game movies. Even with the likes of director Justin Kurzel (2015’s MacBeth), it merely reaffirms.