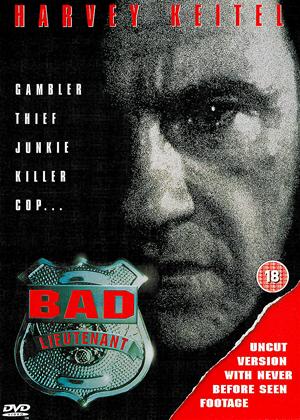 Synopsis:
He's the kind of cop who steals drugs off a dead man's body, the kind of father who'd rather feed his drug habit than his family. His badge means nothing to him other than the right to act like the very criminals he's supposed to be chasing and the fierce anger beneath his personality is only fuelled by his addiction to heroin, crack and alcohol. But when a beautiful young nun (Frankie Thorn) is raped on the altar of a local church, the 'Bad Lieutenant' (Harvey Keitel) is drawn to her case and into a final desperate attempt to find the true depths of human sin and the power of mercy.
Actors:
Harvey Keitel, Victor Argo, Paul Calderon, Leonard L. Thomas, Robin Burrows, Frankie Thorn, Victoria Bastel, Paul Hipp, Brian McElroy, Frankie Acciarito, Peggy Gormley, Stella Keitel, Dana Dee, Anthony Ruggiero, Vincent Laresca
Directors:
Abel Ferrara
Producers:
Edward R. Pressman, Mary Kane
Voiced By:
Warner Fusselle, Bob Murphy, Bruce Murray, John Clohessy, Chris 'Mad Dog' Russo
Writers:
Abel Ferrara, Zoë Lund
Studio:
20th Century Fox
Genres:
Drama, Thrillers

Sign up
The Taking of Pelham One Two Three

Even Harvey Keitel couldn’t save this one. - Bad Lieutenant review by CW

Harvey Keitel always commands the scene in any movie he is in. I’ve tried to see all of his movies. I saw Bad Lieutenant years ago and remembered it as grim and trashy. Still, I wanted to see it again because of him. Worthless. He plays a vile, corrupt strung out drug addict thief, a totally corrupt detective with no redeeming qualities. He either totally nails the look and behaviour of an addict (speed, crack, cocaine, heroin) or he had a lot of practice to get that tooth grinding demented look. Harvey Keitel must have it written into his contacts that he always gets at least one nude scene. I can’t think of any movie where he doesn’t get one. At times his acting in Bad Little is very good but I do not recommend this movie.

It's A Lock - Bad Lieutenant review by JJ

One of the best films of the 1990s, this pushes the boundaries of what can be shown.

At heart a search for redemption and centred around the tension between an innocent young woman who retains her capacity for humanity and forgiveness despite suffering a terrible crime, and a man who has become mired in an apparently hopeless depravity in his job as a NY cop.

It explores similar themes both morally and theologically to Keitel's earlier Mean Streets (though it's a better film) and it takes us to the very heart of the distinctly ungentrified streets of NY at the height of its epidemic of crack cocaine in the very early '90s with its astounding location settings, actual dealers' apartments, crack dens and all, use of real-time camerawork on the street and improvised acting. The film stands or falls on the absolutely committed performance of Keitel, who is in practically every scene, and for me this allowed the director to make real both the sadness underpinning the degeneracies in which he is so lost and the genuineness of his attempt to redeem that despair in the last act of the film.

I hadn't seen it in years and found it as compelling as when I walked out of the cinema as just one of a totally silent crowd over 25 years ago, it had not lost one bit of its dramatic power.