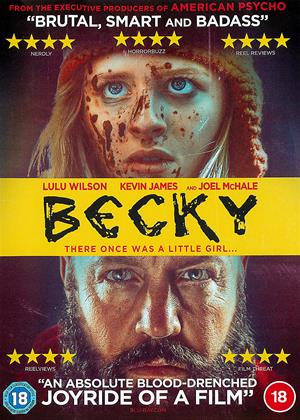 Akin to how Adam Sandler surprised everyone with his superb role in Uncut Gems, one might react similarly to Kevin James’ role in Becky. Far from playing the loveable lug of an overweight man with a big heart, James slips into the role of a bearded white supremecist with ease. It’s a performance that is sure to mark some shock from the many who have endured James’ watered down comedies to discover “wow, he’s more talented than I thought.” There’s nothing awards-worthy here that you absolutely must see to believe, but its a decent film for James dipping his toes more in the horror-thriller genre.

The premise is a simple one, best built for violent and gory bouts. The titular Becky (Lulu Wilson) is a teenager with a life most troubled. She’s bullied at school and faces difficulties in dealing with the death of her mother. Hoping to make her feel more comfortable, Becky’s father Jeff (Joel McHale) decides to take her on a trip to the lakefront cabin. They pick the wrong time to go on vacation, however, as Neo-Nazi prisoner Dominick (Kevin James) has escaped from prison with his goons, willing to kill anyone in their way (including children). His arrival couldn’t be more poorly timed for Becky who must also deal on the trip with Jeff’s new girlfriend of Kayla and her young son Ty.

With her family held hostage, Becky goes Rambo out in the woods and tries to get the upper-hand on the attacking Neo-Nazis that hold her family hostage. This turns into a tense showdown over walkie-talkies of who has the advantage. Becky pretends as though she has already called the cops but Dominick isn’t buying it. Dominick ultimately wants Becky to give him a key is seeking but Becky’s smart enough to know that someone as violent and demented as Dominick will leave no witnesses behind. With no other options, Becky defends herself in the most violent ways. How violent? Let’s just say Dominick loses an eye at some point their scuffle.

Becky is a pretty simplistic action picture that more or less gets the job done of being ruthlessly horrific and gruesome. The teenage hero doesn’t compromise and uses any weapon she can against her attackers, from a sharp ruler to nails. The film doesn’t really have much to say, even with a Neo-Nazi as that antagonist, treated more like bad-guy peppering than anything meaningful observation on the decay of race relations. Most conversations are relegated to ho-hum action banter. Dominick tries to play the nice guy at one point, telling Becky he doesn’t want to hurt her. Becky responds that she DOES want to hurt him. And she continues her kill streak by never giving the bad guys a chance to make their case, even with the one baddie who turns soft when realizing that maybe threatening to kill children isn’t a good look.

Becky is best served as a simple slice of brutal revenge with a young woman dicing out the pain. Lulu Wilson holds her own pretty well as gnashing action hero and James does alright for a role that gives him little to than intimidate and take some punches to the face. There’s some neat violence and gore but I couldn’t help but feel there’s a bigger story here that feels woefully neglected, evoking as much commentary as a sloppy grindhouse picture more notable for the blood than the message. Still, as a greasy bit of cinema junkfood, it’s not too shabby for being little more.