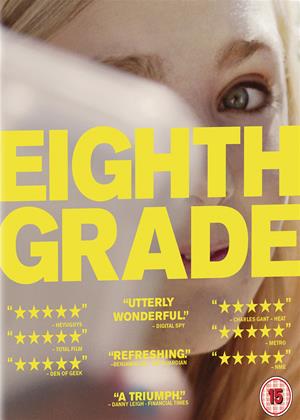 Not for me - Eighth Grade review by TH

Theres no doubt this film is well intentioned. This film is by no means bad, I just dont think I was the target audience. This film follows a young girl navigating her way in life just before joining high school. This features some very natural performances but is mainly a lot of social media quirks and plots along relying on people being able to relate to the character.

If you are over the age of 20, don't bother with this purile rubbish. Probably well intentioned like the previous review said.

With no shortage of coming-of-age teen dramas on the rise, there’s a lot of pressure to raise the standards of how relatable these types of films can be. Eighth Grade is a film with an incredibly firm pulse, favoring youth that feels identifiable with a story that touches deep. A tricky balancing act but one that first-time director Bo Burnham pulls off with a remarkable grace as one of the finest films of 2018.

Oh, but dad isn’t a mere bumbler that doesn’t understand. Josh Hamilton plays perhaps one of the most lovable, patient, and understanding of dads trying to deal with his daughter in a delicate yet affectionate manner. He tries to keep conversations light and cheerful without being too embarrassing but Kayla has far too much on her mind. Concerned with boys at school, gossipy girls, and deeply terrified of taking the next step in everything from school to relationships, dad only seems like an obstacle to her. When locked into social media or staring at a boy she likes, the world disappears and her mind blocks out all audio as she likes the latest post, reads the latest article, or chats with a new friend. She also dabbles in video, recording a diary of sorts that becomes a bit painful for her to go back and watch after all these years.

Burnham pulls off an astounding feat of a picture that does an ample job connecting with both young students and well-meaning parents. Kayla’s routine and school banter feel natural for how off-putting it makes her feel and speak when it comes to handling the oddities of being at that certain age, when the shackles of childhood are just begging to be ripped apart. You don’t have to know all the trends to relate to being so uncomfortable at a party you call for your dad to pick you up pronto. You also don’t need to be up on Rick & Morty to see how easily Kayla eventually connects with someone that genuinely likes her outside of the typical social circles. Of course, Hamilton’s performances is very relatable, especially for the film’s fantastic climax of him admitting truly how much he loves his daughter, remarking how she doesn’t even know the lengths of his pride, even when she seems to shove him away at every turn.

Eighth Grade was rated R by the MPAA for its language but there was a national push in America for teenagers to go see this film as relatable subject matter. Despite the naysaying of some parents, I must admit to the impact of the campaign; tweens talks this way and think this way. Perhaps not as overt or even subtle as Kayla’s but these thoughts linger. And for a film to not only admit to this uncomfortable aspect of growing up but also find warmth and ease of its transition is what makes this coming-of-age film one of the best of its kind of the decade.