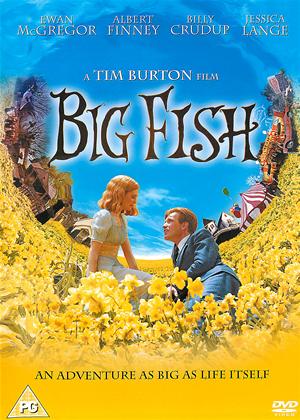 If you enjoy beautiful fairytales, lush cinematography, and watching the end credits with a glow in your belly- this is the film for you. If you hate strung-together vignettes and Helena Bonham-Carter, then avoid this one. Recommended for overcast Saturday afternoons, or the last film in a DVD marathon before bedtime.

I'd been put off this movie by the poor descriptor on the back, but watching it at last, I wished I'd seen it before. A fantastically put together story, keeping you enthralled by the tangental shaggy dog stories throughout the movie. A sad and exciting story all in one, not a tear-jerker, with a real twist in the tale - contains romance, no sex or violence, but never - never a dull moment. Showing that truth can really be stranger than fiction.

Despite the lavish production values and a great cast, 'Big Fish' is little more than a random mish-mash of fantasy dream vignettes strung together with a weak and badly scripted story. If you're a big fan of Tim Burton you'll obviously want to see it, though otherwise it's worth giving a miss.

I don't usually like Tim Burton's films - and this one isn't any exception, although it's better than much of his whimsical output.

This one tells the story of a man trying to know and understand his dying father, trying to get behind the tall stories he told, to find the truth - only to find that there's perhaps more than a grain of truth in the shaggy dog stories...

Unfortunately it's all a bit too whimsical for me, a bit too American - even though it has Ewan McGregor, Albert Finney and Helena Bonham-Carter all attempting dodgy Alabama accents.

Very average stuff. I didn't like it so I'll give it 2/5, but it may be worth a little more if you like sugary, whimsical, fantasy films...

A bizarre, unfathomable mixture of life, metaphor and tall stories that makes you question why you are watching this poor film rather than shampooing the goldfish, as the viewer never really understands what is going on/went on w.r.t. the truth. A selection of good UK actors and actresses showing what they could do (despite having to do a Southern US state selection of accents, but doing so professionally and consummately) and the film is the sort of thing that Tim Burton, the Coen brothers and M NIght Shyamalan do with their odd outlooks on film making. Cannot recommend it at all

Tim Burton likes his concepts and redesigining trodden paths. This is a romantic journey through a dying man's life supposedly the truth that is too crackers for his son to believe. Do we believe it? Well it doesn't matter. The quirkey outlook of Burton keeps it colourfull and interesting. When you stop to think about it: why tell this heavily contrived story in the first place? No idea, but if you liked the barmey Edward Scissorhands you won't have much trouble enjoying this.

Entertaining yes, fairytale? Well yes that is what this is and what's wrong with that?