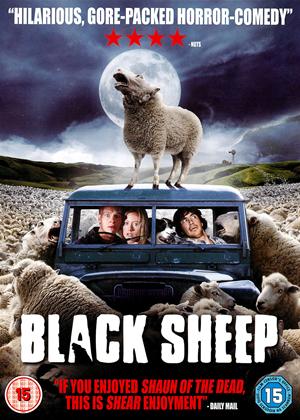 I watched this film having seen a trailer for it early this year with not too high expectations. After 6 minutes I couldn't believe that it hasn't receieved more prominent attention.

The problem with many comedy-horror films is that they have rubbish effects and no plot. This film has pretty good effects as well as using live action sheep for many sequences. The plot is also pretty good as it does a great job of making you laugh intentionally, whilst still maintaining the crazy blood crazed sheep storyline. Gore is used frequently but effectively and the characters are amusing and the acting is perfect for the film.

Not BAAAAAd at all...

From the general direction of 'down under' have come some weird and wonderful creature-features including 'Night of the Lepus' (giant killer rabbits - truly awful) and 'Razorback' (giant killer wild boar - not that bad), both from Australia, and now from New Zealand we have 'Black Sheep' (mutant killer sheep).

What? Killer sheep? You must be joking - and indeed, that's the whole point: the entire film is a comedy horror film, black humour with some bits of appalling (and funny!) bad taste.

Killer sheep aren't scary, not even a were-sheep. Even with the buckets of blood and assorted body parts, this isn't a horror film but a comedy that pokes fun at many easy (and some less easy targets): naive animal rights activists, ovinaphobic (fear of sheep?) farmer's son, mad scientists, another son with a love (geddit?) for sheep etc etc.

This film has the makings of a B-movie cult classic. 4/5 stars - recommended.

B movie cult horror-comedy (plagiarised from the 2 previous reviews) is a good précis. But it is B movie stuff so expect it to be a bit raw and low budget. The Kiwi's do not shy away from some obvious sheep jokes.

I watched this film a few years ago and gave it 2 stars; I watched it again last night and will now give it 4 stars - I think I was impatient and drinking the first time, so didn't concentrate properly!

This is great fun. No CGI - too expensive - but some great models of killer sheep instead. OK they look like models, but so did the shark in Jaws!

The plot hangs together well enough to ignore the more absurd plot points and scenes.

Budget comedy horror at its best. And maybe ALL horror is comedy anyway - why people scream then laugh in cinemas showing horror films.

Lovely footage of New Zealand too. Funny characters - I loved the greenie environmentalists. Acting's a bit ropey at times and don't think too hard about the plot and some of its holes...

If you're in the right, silly mood, then this is a good fun movie to watch, for any kind of sheeple! 4 stars and a bit!