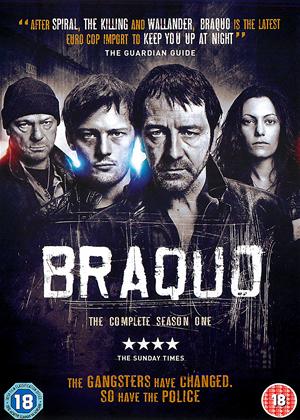 After I had seen the excellent French cop thriller '36' I looked for others by director Olivier Marchal and discovered the TV series 'Braquo' (slang for heist, or armed robbery). It is superb - in fact it is the best police thriller series I have seen. I would previously have given this accolade to 'The Wire', but 'Braquo' beats it hands down.

If you want your cop thrillers to be dark, gritty, realistic, violent, edge-of-the-seat stuff then this is for you. Populated by seedy looking villains - not to mention the seedy looking cops whose only consistent uniform seems to be a well worn leather jacket - the story has several interwoven threads. As the cops fall ever deeper into a pit of violence and extra-legal activities they face the loss of their jobs, imprisonment or death. Tense stuff with excellent acting throughout, giving a sense of depth to the characters as you follow them at work, with their families, with their wives and partners.

The action is non-stop as the story builds to a complex climax, leaving (of course) a hook for a 2nd series.

I found it gripping and watched it straight through - 8 x 50 minute episodes. And I've now ordered the 2nd series - I expect it to be just as good.

If I have one criticism it's that the subtitles are in American rather than English, but I can live with that.