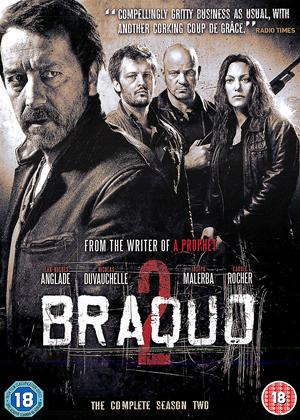 Tense, violent, cop thriller. Pity it's not as good as Series 1 :( - Braquo: Series 2 review by RP

The second series of 'Braquo' (French slang for heist, or armed robbery) starts where the first series left off - in other words, it's not standalone as the characters and the complex, sticky situation they're in is the result of events in Series 1. If you haven't seen that yet - watch it: it's great stuff.

I watched Series 1 is a single sitting and I guess my verdict on Series 2 is that it took me two sittings for this one. So it's pretty good, but it certainly wasn't as good as the first..

While the action sequences in Series 1 are realistically portrayed, the events and storyline are less so - there are some most unlikely twists and turns to the story, but the tension and momentum keep it going and any sense of disbelief is suspended as you are carried along by the pace and momentum.

However, in Series 2 the events become somewhat more than unlikely: they become silly. Having said that, again the pace of the action is relentless and it is possible to be carried along. But this time I just didn't believe the storyline. Just to give some idea of how over-the-top it is it includes, among other things, the theft of 400kg of gold with 10 deaths (but without any apparent nationwide hunt for the killers) and the gold is stolen to compensate families of loyal soldiers killed in Angola 16 years before. There is torture by electric shock (but with apparent instant recovery), an Internal Affairs investigator who dresses as a prostitute and commits multiple murders, and worst of all a 'magic' weapon shooting 'magic' bullets that only kill baddies. Those are just a few examples: there are many more. There are Jewish baddies, Armenian baddies, German baddies, ex-military mercenary baddies, police baddies, businessmen baddies, political baddies - I may have missed a few there - so plenty of baddies to go round.

Again the baddies are violent and seedy, matched only by violent seedy cops wearing their uniform of well worn leather jackets. And there is a little bit of character development until you begin to know and feel how each will act, which is all good stuff.

It's tense, violent, and the action is non-stop for 8 x 50 minute episodes and I can recommend it - and of course there's a hook at the end for Series 3. This time I'll give it 4/5 stars because of the sheer improbability of the story and while I'll watch Series 3, I have a nasty feeling that unless the writing substantially improves it will get even sillier.

[Aside: the subtitles have improved - this time they seem to be (mostly) in English rather than American]