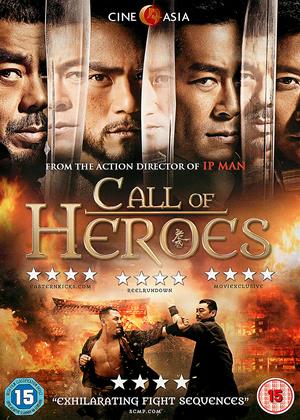 Synopsis:
"Call of Heroes" thrills throughout in its tale of skilled martial artists, who take a stand to protect their village against a ruthless army. In 1914, after the collapse of China's Qing dynasty, Yang Kenan (Sean Lau) is appointed as guardian to defend the rural village of Pucheng. When a lone man enters the village and takes innocents lives, Yang makes the decision that he must be sentenced to death. It emerges that this man is Cao Shaolun (Louis Koo), son of a sadistic warlord, and his army demands the son is released, threatening to bring death and destruction.
The village soon becomes split between those who want to stand against the warlord, and those who want to set Cao free in a bid for peace. As the odds for peace lessen and the pressure mounts for Yang to release the murderous captive, a stirring tale of heroic resistance unfolds as he and a team of skilled villagers make a last stand against the warlord's vicious army. In the face of insurmountable odds, heroes will rise.
Actors:
Ching Wan Lau, Eddie Peng, Louis Koo, Wu Jing, Quan Yuan, Shuying Jiang, Kai Chi Liu, Patrick Keung, Cheung Chun Kit, Sammo Kam-Bo Hung, Tin Chiu Hung, Ting Yip Ng, Jiaolong Sun, Yu Xing
Directors:
Benny Chan
Producers:
Benny Chan, Alvin Chow, Daniel Lam
Writers:
Benny Chan, Wai Ching Tam
Studio:
Cine Asia
Genres:
Action & Adventure, Classics, Drama
Countries:
Hong Kong, Action & Adventure, Classics, Drama

Reviews of Call of Heroes

Amidst a Chinese ocean of CGI frenzy comes Call of Heroes – which walks, talks and breads authenticity all over its production value, rendering real sets back in play after a long while. Thus, it can be stated that Call of Heroes is equal times rigorous as it is authentic, but only to an extent of absolute and immense qualitative control. What I’m trying to say is that Benny Chan’s project, written by also Benny, is a guilty pleasure worthy of indulging in for entertainment’s sake. So it’s basically good.

From the get-go, it’s perfectly clear that Berry Chan’s project rejects stereotypical eastern genre tropes and opts instead for their western counterparts – for the majority of his film’s running time that is. Therefore, in the sole beginning of the movie, we’re introduced to Ma Feng (played by Eddie Peng) – a mysterious lone wanderer whose interior motives stay unclear for us to understand. Be as it is, his tongue-in-cheek antics prove too much for the village master to handle, and so he goes head first into what becomes a mess of epic proportions between an unknown criminal and the patrons he’s trying to rob of their goods.

Funny enough, Ma Feng starts a flame war in which bigger players control the strings, and he is not fully aware of what consequences it will have further down the road. Either that, or he just doesn’t care if other people will draw the shorter end of the stick for all that noise.

A true paradigm of a loner.

Then, a certain Shaolun enters the village and disposes of three people in total – a crime to which he takes the highest pride in doing. Meanwhile, Sheriff Yang does everything in his power to reinstate order, and so he proceeds to acknowledge that Shaolun must hang for his crimes against humanity. But, as conflict brews deeper among the village residents, Shaolun’s army commandant Zhang Yi (played by Wu Jing) threatens Yang to release their commander-in-chief or face grave consequences if he refuses.

Needless to say, Yang and the villagers do not take threats lightly anymore, since they’re sick of Shaolun’s rule altogether, which is also long overdue.

However, intrigue and double-crossing just start happening as several of General Zhang Yi’s troops try to break Shaolun out of prison in a failed attempt that rallies the villagers to petition releasing the wrongdoer at their leader. And now Sheriff Yang is put before an ethical and tactical dilemma: not releasing the prisoner would lead to a battle that would ultimately mean total and utter annihilation; on the other hand, if they give up of Shaolun altogether – that would mean spitting in the face of justice itself.

So, what gives? Further elaboration on the plot would spoil the main theme and motifs the movie plays with, so go ahead and see it on your own.

Ultimately, Call of Heroes is a great homage to the loner genre, and also an action packed experience that will boil the blood down your arteries and veins. Or something like that that involves many manly hormones.