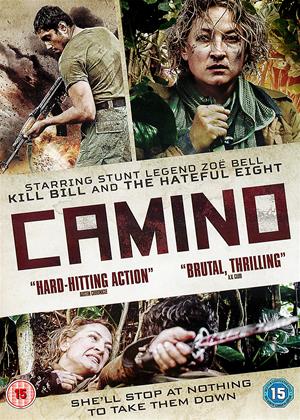 One of the most admirable aspects of this bloody action-horror picture is its score. With its deep synth and brooding melodies, it perfectly conjures up memories of 80’s action survival shlock that attempted to be dark and gritty. This would be a positive except that most of those pictures were enjoyable on cheese level and were still bad movies at their core. There’s a fine line between the dramatic tension of First Blood and the goofy dreariness of Deadly Prey. Camino ends up somewhere in the middle as it fluctuates in tone.

To its credit, you couldn’t have picked a better star than Zoe Bell to be a female Rambo. As the war photographer Avery, she finds herself in a tough situation in Columbia. She follows around a group of freedom fighters combing the jungles and the villages they protect. When she photographs the a friendly rebel leader both selling drugs and killing a child witness, she now becomes a target of the rebels. The once warm spirit of the freedom-fighting leader soon turns into a dark force as he convinces his followers that Avery has slain the child. Thus begins a hunt through the jungle of Columbia where corruption and miscommunication result in a bloody fight of guns and knives.

From a story standpoint, Camino is very light on depth. There’s no major discoveries in the characters present as they spend most of the time questioning their loyalty and deciding who to follow and who to kill. The drug angle is never fully explored, the perspective of the villagers being protected is rarely seen and the little subplot about a spiral symbol of death is nothing all that engaging. There’s a little bit of character given to photographer Avery who regrets ever coming to Columbia in that she’s already won an award and starts hallucinating her colleagues in the jungle, but it’s an aspect hardly explored.

What I did find most admirable about the picture was it’s nostalgic kick of a 1980’s action B-movie. I can’t tell you how many movies from that era I’ve seen where a hero is running around a jungle with a foreboding soundtrack layered over a fight for survival. The music switches between various dark synth tracks that create a great sense of brooding and tension. The violence is brutal, physical and creative in how these characters battle one another in twisted ways. I almost kind of love the picture for nailing this vibe so well whereas other pictures fail to capture such moods.

While Camino embodies the style of an 80’s action picture, it still fits the suit of a forgettable 80’s action picture. There’s a reason why The Road Warrior is more notable than Deadly Prey. I had fun with the picture and its atmosphere, but only for as much as I’d enjoy a cheap and dark action picture with horrific violence in the jungle. It’s plucked from the VHS era and, having been a part of that era, there’s a nostalgic glee to such a simple movie with brutality. For a fan of cheap action, I dug it, but I have to put that “however” on this picture as it won’t offer much to anyone outside that range. At the very least, it’s a competent movie that’s brilliantly shot and perfectly paced. And considering most of these cheap action pictures rarely cover these basic concepts, that’s a very good thing.