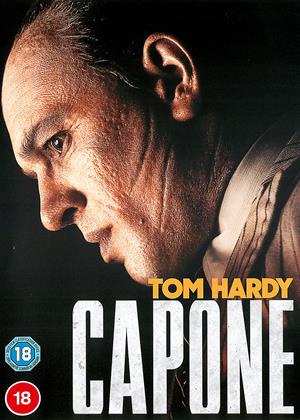 obnoxious aged Capone grunts & mumbles unimteligably through out this wasted opportunity of a film.very disappointing

Bless Tom Hardy for once more jumping face-first into a ludicrous and overblown role, embracing it with a gusto unlike any actor. Just imagine anybody else in this role. John Travolta could possibly pull off the look, but he’d no doubt sleepwalk through this picture, trying to place too much dignity on a decaying Al Capone. Hardy doesn’t go soft on this picture, even if it seems director Josh Trank keeps this mafia movie a bit too tame and not wild enough to hold Hardy down.

Hardy plays the Chicago bootlegger Capone in his late-40s, having just gotten out of a 10-year prison sentence for tax evasion. It’s clear that the man is now in the twilight of his life and just because of his dangerous profession. Dementia has started to take its toll on his mind as his body begins to fail him with neurosyphilis. His crime days are over anyway, having retired with his family in Florida now under constant surveillance. As he starts selling off his stuff and watching his empire crumble, Capone breaks down into hallucinations of his past amid trying to recall millions of dollars he had hidden somewhere secret.

Capone bounces around all over the place in the lens it pursues for the gangster’s final days. There’s a sloppy sense to the way we jump between Capone’s rapidly deteriorating state and his more violent days when he was in his prime. But there’s such a flux in tone and character that it’s almost impossible to tell just what the hell Trank is trying to say with all of this. The initial perception might be based on an old and fading Capone is that the man may be seen with some pity for a humanity rarely recognized. This is not the case. Capone is portrayed as ugly and gross, both in his prime and his old age. So what’re we supposed to take away from such a film? Hard to say.

What I can say is that for providing an unrelentlingly cruel version of Capone never making it to his 50s, it works as a vehicle for Hardy if nothing else. In the same way that he chucked himself into a lobster tank in Venom, here he doesn’t shun away from all the grossness that such a figure would muster from a life of crime and unfortunate retirement. Even when the film seems to stall in its set pieces, Hardy is always alert enough putting 110% into a role that would seem better suited for a more aged actor, despite’s Capone age in the film.

The appreciation for Capone perhaps comes more from the execution than any message that might be conveyed in the film’s unorthodox and sometimes confusing assembly. Or it may be the opposite for some if they can find that meaning behind this nonlinear gonzo effort. The film itself is a bit of an enigma, but entertaining enough to be worth further examination than just being a run-of-the-mill late-stage gangster picture.