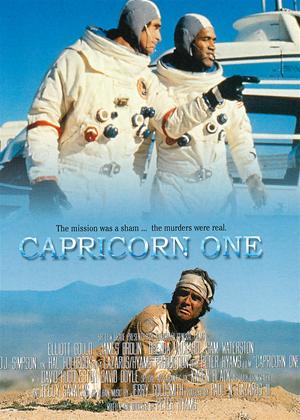 Sign up
Harry Potter and the Chamber of Secrets

Reviews (1) of Capricorn One

Rather good conspiracy film - Capricorn One review by RP

The 1970s abounded with 'conspiracy thriller' films - think 'Three Days Of The Condor', 'The Stepford Wives', 'The Parallax View', 'All The President's Men' etc. And here's another one, this time perhaps inspired by the conspiracy theories about the moon landings.

This time, it's a manned Mars landing that is faked - perhaps with understandable reason as the NASA space programme is under political threat and private sector profiteering sees a faulty life support system installed. So the three astronauts are smuggled off the space vehicle, forced to participate in fake TV broadcasts - only to have the returning spacecraft burn up on re-entry. So the astronauts are surplus to requirements and must escape before they are killed to cover up the fake...

The film has the right ingredients: brave lone investigative reporter (Elliott Gould), geeky technician (Robert Walden) who suspects something is wrong and is 'disappeared', heroic astronaut (James Brolin) and of course a big bad conspirator-in-chief (Hal Holbrook). It even has black helicopters - well, strictly they're olive drab, but do look black in most shots.

In these older films it's interesting to spot smaller players - here we have a poor love-interest cameo by the otherwise always excellent Karen Black and an annoying cameo by Telly Savalas as a crop-spraying pilot. We have the later notorious O.J. Simpson and the rather good Sam Waterson as the other astronauts, and Barbara Bosson (later appearing in 'Hill Street Blues' as Captain Furillo's wife) has a small role.

It's fairly slow moving but moderately tense with a good script. I like it and rate it as 4/5, although that does seem a little high - but then I enjoy conspiracy films.

[Aside 2: Although made in the US, the film was financed by British TV money - the production company was Lew Grade's ITC. Because of this, current distribution of the old ITC / ATV / ITV / Granada etc TV series and films - including 'Capricorn One' - is handled by TV companies and subsidies]

[Aside 3: The version I received from Cinema Paradiso was distributed by Carlton and is a poor release with a pan-and-scan 4:3 aspect ratio picture, rather than wide-screen. Because of this, I purchased a copy on eBay of the Network Distributing version. This is a 'proper' wide-screen version with reasonable extras and is a much better watch than the Carlton version]