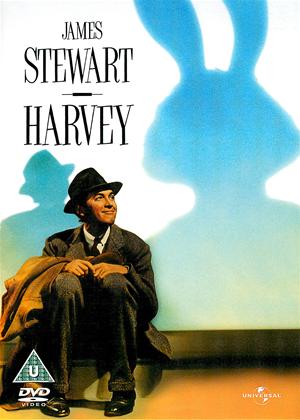 Synopsis:
James Stewart stars as the good-natured Elwood P. Dowd, whose constant companion is Harvey, a six-foot tall rabbit that only he can see. To his sister, Veta Louise, Elwood's obsession with Harvey has been a thorn in the side of her plans to marry off her daughter. But when Veta Louise decides to put Elwood in a mental hospital, a hilarious mix-up occurs and she finds herself committed instead. It's up to Elwood to straighten out the mess with his kindly philosophy, and his "imaginary" friend.
Actors:
James Stewart, Josephine Hull, Peggy Dow, Charles Drake, Cecil Kellaway, Victoria Horne, Jesse White, William H. Lynn, Wallace Ford, Nana Bryant, Grayce Mills, Clem Bevans, Harvey, Gino Corrado, Jack Curtis, Ida Moore, Billy Wayne, Polly Bailey, Don Brodie, Aileen Carlyle
Directors:
Henry Koster
Producers:
John Beck
Writers:
Mary Chase
Genres:
Classics, Comedy
Awards:

It gets four stars from most reviewers but in my book that slightly underestimates this gem, which stays with you much longer than the slight, smile-worthy story might warrant.

Mostly, that's because it has got integrity. It is strongly cast with each character performing better than they are written, and at the centre is the slow-talking Stewart showing that everyman touch that made him the Tom Hanks of his day. It's in the same mould as Big. Maybe not so laugh-out-loud but there's still plenty to enjoy, from the reply to the wonderfully named Myrtle Mae's enquiry "Do you enjoy your job, Mr Wilson?" (I do now, Miss Myrtle. I do now!) to Aunt Vita fighting off her "white slaver". You may initially have trouble swallowing the premise of Stewart, but for my money, if you do it is a better story than 'Big', having a basis in myth rather than fantasy, a proper resolution, and a wider theme, in the 'childhood friend'.

I could imagine this working rather well as a musical.