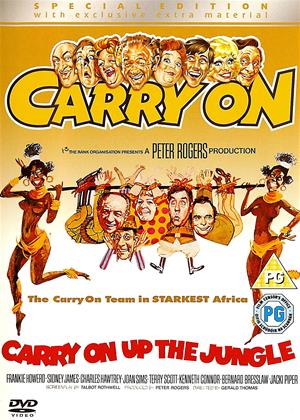 Rent other films like Carry On: Carry on Up the Jungle

Reviews (1) of Carry On: Carry on Up the Jungle

Carry On, Follow That Oozalum Bird! - Carry On: Carry on Up the Jungle review by Count Otto Black

The Carry On series reached its high water mark in the late sixties, then as the seventies dawned and the Pythons rewrote the rules of comedy, all that "May I show you my credentials? Ooer missus!" business suddenly seemed terribly stale. The rot set in with this film, the first of a run of sub-par Carry Ons that nobody remembers because they weren't shown on telly anywhere near as often as the good ones. Ironically, a subplot in the film involves the legendary oozalum bird, a creature with the peculiar gift of being able to disappear up its own bottom. Over the course of the seventies, the Carry On franchise slowly but inexorably did that very thing.

A small cast featuring fewer series regulars than usual, with Frankie Howerd standing in for Kenneth Williams as the extremely gay actor playing a rampant heterosexual, travel, for no particular reason, to Africa. Or rather, they travel to a small indoor sound-stage whose tatty shrubbery is rearranged in various ways to represent that entire continent. There's also another slightly larger studio containing a marginally more expensive village set, but it must have cost a lot more than the small one to hire by the day because it takes our heroes three-quarters of the film to find it. The final scene in a London street looks jarringly odd because in a movie which supposedly takes place almost entirely in the open air, it's the first (and last) time we're actually outdoors in a real place.

The African wildlife ought to provide plentiful opportunities for comedy, but since it's nearly all stock footage and the only animal the cast can directly interact with is a man in a very cheap gorilla suit, they mostly do exactly what they'd do if they weren't in Africa: leer at and sexually pester women whom they obsessively try to spy on in the shower, and mistake absolutely everything said by anyone about anything for a double entendre. The best joke by far is when, as part of a fertility rite involving various objects symbolising marriage, Sid James is given a very big banana, and for once even he is at a loss for words.

This is truly dismal stuff. The seldom accurate General Info page claims it's a TV movie, which it isn't, but I can understand why a lazy researcher might think so. At a casual glance its barrel-scraping production values make it look a lot like something made for early seventies low-budget TV, probably for kids. Persons of a politically correct bent, already foaming at the mouth from the relentless sexism, will be forced to switch off the moment they catch sight of Bernard Bresslaw in blackface, but strangely that nowadays unacceptable comedy trope doesn't come across as all that racist. The black man may be an idiot, but so is everybody else. At times he even seems to be marginally less stupid and useless than the white men, especially Terry Scott's Ugg, a sub-moronic Tarzan spoof who makes George of the Jungle (remember him?) look like... well, like Tarzan.

Oh, and there's a Lost Village Of Leather Bikini Women, but by the time you finally get there, you'll have long since stopped caring. "Wild Women Of Wongo" did it better, and looked as though it had a much higher budget. If you want some old-style unashamedly low-brow humour, almost any Carry On film made in 1969 or earlier will do the job far better than this feeble effort, and although none of the previous films were what you'd call big-budget, they weren't embarrassingly cheap. "Carry On Up The Khyber" may not have been able to afford to go to India, but at least it went as far as Wales. This one can't even afford to go outside.