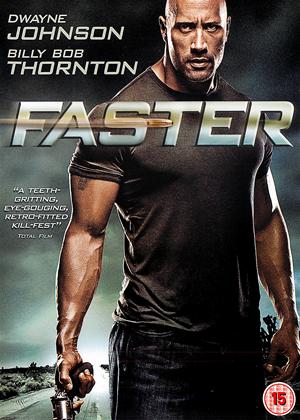 ‘Revenge is a dish best served cold’, so says the popular and much-revered Klingon proverb. But for Dwayne ‘The Rock’ Johnson’s revenge is a dish best served raw and with a hell of a lot violence! Dwayne Johnson gets back to his original job of kick-ass and bad-assery, leaving for the meantime being Disney’s poster-boy as Gentle Giant. But with ‘Faster’, Johnson seems out of place and out of his element.

‘Faster’ is about a man called Driver who is released from prison and is hell-bent to avenge the murder of his beloved brother and the people who put him in jail in the first place. And the moment he’s out, he starts killing them villains without blinking. Forget exposition and plot, shoot ‘em up!

‘Faster’ is a grittier take on the 70’s revenge flicks that Charles Bronson kick-started in ‘Death Wish’ and maybe even the male version of Quentin Tarantino’s ‘Kill Bill’ films. But that’s it – revenge is what they all share in common, nothing more. In ‘Faster’, Driver’s back story is not exactly fleshed out; we do know he can throw mean punches and is an ace with guns and ammo. But going through all those baddies without much of a personality defeats the purpose of vengeance. At least Kill Bill’s The Bride had the audience invested that we actually cheered her on as she writes off name after name on her death list. The graphic nature of senseless killings does not a revenge movie make.

The movie also taps the talents of Billy Bob Thornton and Carla Gugino as the cops tasked to rein Driver in from his erroneous, criminal ways. Not much to see here; Thornton and Gugino did this movie for extra cash and you know it. Even its villain, the hitman played by British actor Oliver Jackson-Cohen, can’t even make ‘Faster’ compelling. In the end, The Rock stars in a movie wanting to be taken seriously when its material is a hoot at the get-go. Could it be that he’s better being the Gentle Giant after all?