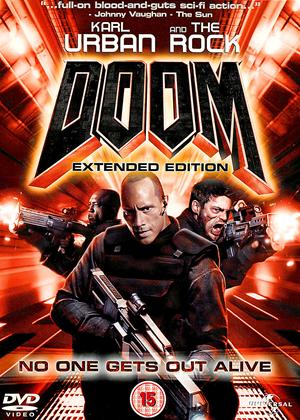 Synopsis:
Something has gone wrong at a remote scientific research station on Mars. All research has ceased. Communication has failed. And the messages that do get through are less than comforting. It's a level 5 quarantine, and the only souls allowed in or out are the Rapid Response Tactical Squad, a squadron armed to the teeth with unprecedented firepower to carry on their mission: nothing gets out alive. But a legion of nightmarish creatures of unknown origin lurks behind every wall and stalks the countless rooms and tunnels... far more powerful and blood-thirsty than anyone could ever imagine.
Actors:
Karl Urban, Rosamund Pike, Dwayne Johnson, Deobia Oparei, Razaaq Adoti, Richard Brake, Al Weaver, Dexter Fletcher, Brian Steele, Ben Daniels, Yao Chin, Robert Russell, Daniel York, Ian Hughes, Sara Houghton, Blanka Jarosova, Vladislav Dyntera, Petr Hnetkovský, Jaroslav Psenicka, Marek Motlicek
Directors:
Andrzej Bartkowiak
Producers:
Lorenzo di Bonaventura, John Wells
Writers:
Dave Callaham, Wesley Strick
Studio:
Universal Pictures
Genres:
Horror, Sci-Fi & Fantasy

Sign up
The Fast and the Furious: Tokyo Drift

Well they have a habit of not working very well with few exceptions too the rule. The Tomb Raider films are not that bad, and the same can be said for Mortal Kombat, Silent Hill and the Resident Evil films, (first two at least) but the less said about Mario Brothers, Street Fighter the better!

So now we have Doom, the iconic first person shooter made way back in the eighties that set the standard for games to come. But does the movie do the film justice? It's based on the recent incarnation Doom 3 rather than the earliest versions of the game.

Anyone who has played Doom 3, knows what to expect. Dark corridors, eerie sounds and creatures jumping out of the shadows right at you and making you jump out of your socks. True the film may not have quite the same effect, it is atmospheric and has a fair degree of tension and even has a 5 and a half minute sequence filmed in a first person perspective like the game itself.

This is fresh and innovative and gives the film a 'realistic' edge. It has it's moments and the effects, considering the guys are in rubber suits rather than CGI created creatures does not detract from what, on the whole is a decent monster flick.

True it's not the Rock's best film (Scorpion King surely?) but it passes the time and is an acceptable action/sci fi/horror flick.