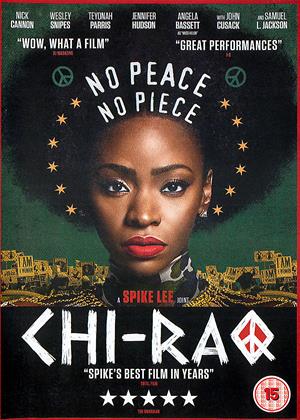 Not for me - Chi-Raq review by BE

Apart from the dialogue being laden with expletives, I was unable to understand the thick black American accent. No subtitles available so gave up after half an hour.

Spike Lee’s Chi-Raq feels very much like the classic director that has been absent for several years. It has a sense of reaction and urgency with an unparalleled level of timeliness missing from Lee’s other joints. It finds humor, vulgarity, music, drama and love amid a dire situation that begs for an eye and an ear. All this doesn’t make it one of Lee’s best, but it does unearth the director that America needs.

The term Chi-Raq comes from the comparing of Chicago to Iraq in how more Americans have died of gunshots on its streets in the last twelve years than in Middle Eastern countries. Gang violence has crippled the city and nothing seems to be working. Drawing from the plot of the Greek comedy “Lysistrata”, the women of the city conspire a protest to put an end to the violence by denying the men sex. The sexual fasting breeds unease and unrest as the men in charge grow crazy and the women in revolution grow stronger.

Does this sound more like a comedy than a serious drama about street violence? Of course it does, but it goes one further by also being a musical. Characters speak in rhyme as if the script were a melding of Shakespeare and rap music. Samuel L. Jackson narrates as a brightly dressed commentator milling about the story to freeze-frame and pluck characters for examination when he sees fit. Couples this Lee’s constant use of typography and you have one dizzying pastiche of urban plight.

With a script by Spike Lee and University of Kansas professor Kevin Willmott, Chi-Raq runs the table of satire and drama for an unstable situation. It attempts to find passion and demand answers while at the same time provide entertainment in its concept of revolution. When we see the aftermath of an 11-year-old girl dead in the street, it’s shocking and painful. When we see how the men react towards the denial of sex with desperate plans to shut down the protest, it’s hilariously ridiculous. Mentions of Sandy Hook, Freddie Gray and Tamir Rice among others are inserted to provide a real-world connection of how serious this situation is. But then we soon cut to Samuel L. Jackson acting like a blaxploitation Dr. Seuss with his rhyming words and endless terms for intercourse.

Nothing feels underdone. In fact, it may be overdone to the point where this production nearly runs off the rails in its anger and commentary. An old general is portrayed as a cartoonish racist that rips off his uniform to reveal confederate flag underwear. A tank muzzle literally has the words “penis envy” written on the muzzle. Subtle is not in Lee’s vocabulary for this picture, but I’ll gladly take his blunter side anyway.

The biggest draw is the all-star cast that is in top form for this picture. Nick Cannon is perfectly built for the role of the gangster Chi-Raq, decorated in tattoos with an attitude in serious need of clarity. Teyonah Parris commands the screen well as the loud and proud Lysistrata that inspires a world of women to fight with their greatest assets. John Cusack is given one hell of a scene as white preacher raised from a black church that delivers an enraged sermon for bringing an end to street violence. And the list goes on with supporting roles by Wesley Snipes, Angela Bassett, Jennifer Hudson and Dave Chappelle.

Chi-Raq is all over the place and mostly uneven, but still manages to pack the fury I expect from a Spike Lee joint. It’s a movie that stimulates the mind with its tough questions without answers and its imaginative sense of story that never downplays the issue. This is a film that is political, sexual, funny and harsh. It never provides an easy answer and never sticks to one tone. But what I admire most is that it is so refreshing to see Spike Lee finally take a shot with a picture so daring and farcical in its message.