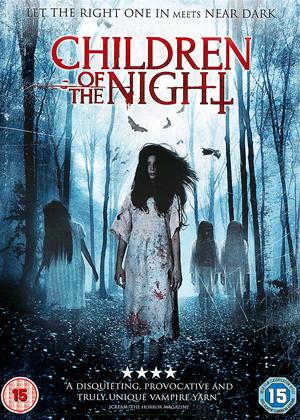 Synopsis:
A journalist investigates a remote orphanage and discovers that it's inhabitants are child vampires led by the grandson of Count Dracula. As she bonds with the children she realizes she must do whatever she can to protect this endangered species from a puritanical cult hell bent on destroying them.
Actors:
Ana María Giunta, Toto Muñoz, Sabrina Ramos, Lauro Veron
Directors:
Iván Noel
Producers:
Iván Noel
Writers:
Iván Noel
Aka:
Limbo
Studio:
Matchbox Films
Genres:
Horror
Countries:
Argentina, Horror

Reviews (1) of Children of the Night

Spoilers follow ... - Children of the Night review by NP

‘Limbo’ is a Spanish film renamed ‘Children of the Night’ for its American release.

Alicia (Sabrina Ramos) is a journalist who is requested by Erda (Ana Maria Giunta), to travel to the Argentinian orphanage called Limbo (where she is Matron), where a large group of children with a rare disease are housed. As Alicia becomes acquainted with the youngsters, some who seem strangely older than their years, we learn she is a haemophiliac, and that is a possible reason why she was rejected by her mother when she was a child herself. This gives her an immediate kinship with the plight of the young folk, which becomes a curiosity: she is sure she has seen many of them before. Considering she was investigating the local disappearance of juveniles as part of her job, it’s surprising it takes her so long to realise these are the missing children.

‘Limbo’ is a home for vampires, who still look the same age they were when they were bitten, some many years ago. ‘Why are there so many children?’ Asks Alicia. ‘Because’, the subtitles tell me, ‘the young looks and tastes more nicer’. Erda weeps for the children because they suffer so much, comparing their affliction to a drug addiction.

Amusement is had when Alicia compliments the youngsters in a maternal way, and is responded to as would an adult who is being flirted with. In another scene, tiny children pass round and subsequently critique a bottle of blood as would seasoned wine tasting professionals. Alicia’s boyfriend, who makes the mistake of visiting (only to leave shortly after), is strung up by his hands, and a tap fitted to his stomach, so the children can cipher off his blood. Dark humour indeed.

Young Seigfreid (Toto Muñoz) was Alicia’s childhood sweetheart, but at 33, still looks like a twelve year-old, (shades of ‘Let the Right One In’). His relationship with her is sweet and tragic and more than a little creepy.

The ‘men in black’, ostensibly the ‘good guys’, (interestingly, the blood-suckers are dressed all in white) who pursue and destroy the children, are definitely the villains here, in their manner and in their deeds. No Van Helsings these. Apart from the revulsion of them attacking (what appear to be) children, we have grown to know these young vampires and when their revenge comes, it is a deliberately orchestrated joyful – and very satisfying - finale. Innards are pulled out and used as skipping ropes, and it is clear whose side Alicia (and the audience) is on.

The ending would seem to indicate that Alicia elects to stay in ‘Limbo’, and uses a webcam recording of her being bitten as a way of blaming and framing the men in black, by having the images feature on the news, and indicating the men in black were responsible, and therefore should be hunted down.

Some of the playing from the juveniles is, as one might expect, a little awkward, but the scenes of them attacking as a group sustains the dangerous quality they nevertheless possess. A strange and enjoyable film.