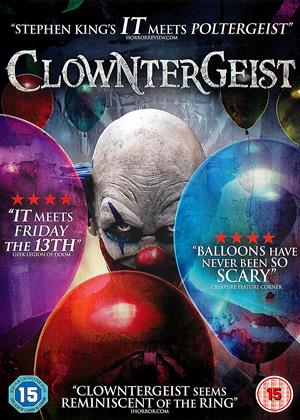 Synopsis:
If you've never been afraid of clowns before, 'Clownergeist' is here to show you why you should be! Emma (Brittany Belland) is a college student with a crippling fear of clowns. When an evil spirit in the body of a clown is summoned, Emma's friends start receiving ballons with the time and date that it will arrive to kill them. When Emma receives her balloon she knows she only has two days left to live and realizes she must overcome her worst fear and fight against the clock to find a way to survive.
Actors:
Brittany Belland, Monica Baker, Aaron Mirtes, Eric Corbin, Burt Culver, Madeleine Heil, Tom Seidman, Johnjay Fitih, Sean Patrick Murray, Caity Runger, Ella Romero, Jesse Mendelsohn, Caitlin Rigney
Directors:
Aaron Mirtes
Producers:
Nathan Johnson, Elena Trueba
Writers:
Brad Belemjian, Aaron Mirtes
Aka:
Fear Itself
Studio:
High Fliers Video Distribution
Genres:
Horror

Fusing two words together to make a new one is a fad I blame ‘Sharknado’ for – tongue-in-cheek parodies promoted as cheap and cheerful Friday night films. I look forward to ‘Ghostvasion’, or ‘Zombislaught’. This, then, could be described as a ‘mockbuster’ riding on the success of Stephen King’s ‘It (2017)’. This film features a host of pretty young things in a town frequented by pretty young things, initially centring around a fast-food restaurant. There is one old fellow, Pops, who works there – he’s not young and he’s not pretty, so at first, my money was on him having something to do with the title’s evil-doer. Wouldn’t that be obvious?

I cannot really dislike this. One of the taglines is ‘balloons have never been so scary’, which immediately charms me. And there are plenty of bulbous red balloons that accompany the occasional murders. The titular menace, an apparently demonic creation, staggers around breathing hoarsely and the constant stings in the soundtrack remind us he is very frightening, which he isn’t, really.

That said, one of the later attacks, which takes place in someone’s kitchen, is rather good, especially when thick black vomit makes an appearance. As for The Clown, it’s never entirely clear what he actually is. Demonic, but made flesh – therefore, how can he physically be killed, or as happens here, arrested? Best not to worry and enjoy this lightweight chiller for what it is. With a title like ‘Clowntergeist’, it is clearly not trying to rewrite the horror genre. Directed and co-written by Aaron Mirtes, it has its moments, and the young cast are enthusiastic and likeable.