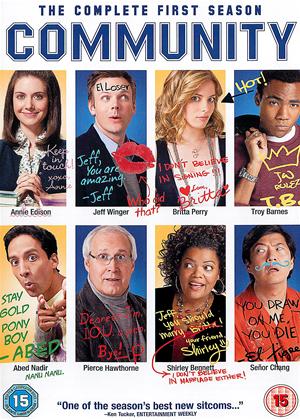 Joel McHale stars as Jeff Winger, a disbarred lawyer who must return to community college to regain his law degree by exploiting his former client Dr Ian Duncan (John Oliver) for test answers in advance. He or castrates the development of a study group so that he can get a date with a fellow student; however things begin to wrong for Jeff when his attempts to woo Britta (Gillian Jacobs) go awry and his prized answer sheet turns out to be blank.

Throughout the series the characters and intertwining relationships develop and help create a genuinely brilliant comedy drama. Starring the infamous Chevy Chase Community has since produced a second and third season.

The film is has a definite modern and popular feel to it, many of the jokes are ironic, self referential and hinge largely on reference to pop culture including spoofing film and other television series’.

It has developed a strong cult following, initially fuelled by the casting of Chase and the rebirth of his comedy career, yet Community is becoming more and more popular with a wider audience. The first series is a fun and charming series and is undeniably one of the greatest American comedies of the last few years. If you like things a little bit left of centre, with a great cast and even greater script then Community is well worth watching.