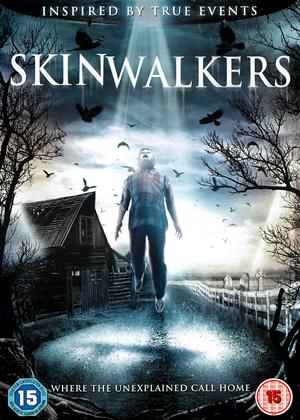 Skin walkers is shot almost entirely on handheld cameras, and so has a touch of the Blair Witch to it. The structure of the film is pretty good in general, but as with many low-budget films, also tends to feel a bit like they didn't develop the story line well before they started, and so made it up as they went a bit along the way. Flawed by enjoyable none-the-less...

Skinwalkers or Skinwalker Ranch as it is also known is a paranormal found-footage film about a group of scientists who investigate supernatural goings-on surrounding the disappearance of a 10 year old boy.

Set on a cattle farm somewhere in the sticks, the film professes to be “based on true events”, as somewhat of a sceptic I immediately rolled my eyes at the concept, but attempting to remain open minded I made myself sit through the film regardless, and for a little while it wasn’t quite as dreadful as I had expected it to be.

Of course all the boxes of the horror genre were ticked from the get go creepy location, vulnerable characters, unexplained noises, you know what you’re getting with most horror films and it takes something truly innovative to make use of these tropes and still surprise you. And though the horror genre is not exactly known for it’s subtly, films that maintain a certain level of class and mystery are, in my opinion at least, usually more interesting and probably more frightening. Unfortunately for Skinwalkers the first fifteen minutes are easily the high point of the entire feature.

Shortly after we are introduced to our characters – many of whom I recognized as bit part players and extras from sci-fi horror television shows – we are thrown head first, into the midst of the paranormal events that have taken place at the ranch. Now whether this was a choice of the film maker or if it is based on the supposed reality of the occurrences at the Skinwalkers Ranch, this paranormal activity appears to include almost everything you could ever possibly think of to include in, reference or throw at a horror film. Ghosts, spirits, aliens, werewolves, you name it, Skinwalkers has it, and within the first quarter of the film any attempt at mystery, subtly, creativity or imagination vanishes.

Skinwalkers is the horror movie equivalent of having a bucket of cold water dumped on your head: sudden, unpleasant and overwhelming. The multitude of monsters is far from scary and, actually, causes every single one of them to lose any sense of character or menace; it is too busy, too manic and too obvious to leave any space for anything else.

In the end Skinwalkers is just crammed too full of the staples of the genre, the characters, location, incidents and apparitions all jockeying for centre position but ultimately all simply getting lost in the crowd.