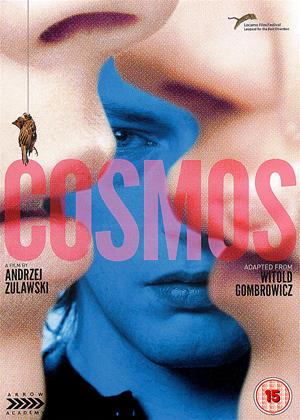 Synopsis:
When two young men arrive at a family-run guesthouse in rural France, their anticipation of a few days' peace and quiet is undermined by a variety of sinister occurrences. A small bird is found murdered, its neck in a tiny noose, a strangely sexualized stain appears on a wall, and a slug crawls across the breakfast tray. Are these all signs comprising a portent of truly cosmic significance, or merely bizarre coincidences? And is it any wonder that one of the visitors, Witold (piercing-eyed Jonathan Genet) has such difficulty writing his novel, or that his companion Fuchs (Johan Libereau) prefers to find solace in earthier pleasures?
Actors:
Sabine Azéma, Jean-François Balmer, Jonathan Genet, Johan Libéreau, Victória Guerra, Clémentine Pons, Andy Gillet, Ricardo Pereira, António Simão
Directors:
Andrzej Zulawski
Producers:
Paulo Branco
Writers:
Witold Gombrowicz, Andrzej Zulawski
Studio:
Arrow Films
Genres:
Drama

The director Andrzej Zulawski referred to "Cosmos" as a "metaphysical noir thriller. It is based on the novel of the same name by Witold Gombrowicz.

A couple of friends escaping Paris, played by Jonathan Genet and Johan Libéreau, stay at a country boarding house and get drawn in to the strange world of the occupants.

Some great performances, particularly Sabine Azéma as Madame Woytis locked into her own angry world and her husband played by Jean-François Balmer living in his own world with its strange speech mannerisms.

The image of Witold (Genet) walking into the sea with his umbrella up shouting, "I'm afraid of the sea" neatly sums up the tenor of this film.

This was Zulawski's last film before his death from cancer.