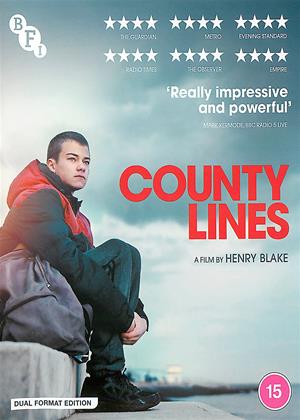 This film, Henry Blake's debut feature, deals with the delicate subject of how an introverted 14-year-old boy is lured all too easily into the world of county lines drug trafficking.

Harris Dickinson and Ashley Madekwe both cede the spotlight to young lead Conrad Khan, who delivers an outstanding performance of unnerving stillness and tightly coiled anguish. 18 at the time of filming, he convincingly plays the younger Tyler, a taciturn social outcast in the pupil referral unit he sporadically attends. Belittled and bullied in class, he’s the man of the house at home, effectively parenting his young sister Aliyah while his single mother Toni (Madekwe) works menial night shifts and sleeps off the days.

Blake’s economical script doesn’t dwell on the history that took Tyler out of school but it's clear enough that he hasn't had much of a chance, with limited support from the authorities and the over-burdened Toni. Rudderless, isolated children like Tyler are easy prey for dealers seeking county lines runners, who apparently are often targeted out of pupil referral units. Blake, who spent some time working in a PRU, plainly knows his terrain here, and when Tyler is defended from bullies one evening by imposing “entrepreneur” Simon (Dickinson), viewers will sense the grooming machine in motion well before the teen, Dickinson subtly mirroring Tyler’s sloping body language and terse, congested speech to suggest how he, too, may once have been in the boy’s uncomfortable skin, cyclically recruited in the same predatory way. A crisp jump to six months later, meanwhile, shows how fast the process can be. Fully immersed in grim drug-mule duty, a hardened Tyler has gone from withdrawn to stone-blank, a transition that Khan navigates with considerable restraint. Between the film’s portraits of hemmed-in masculinity, meanwhile, Madekwe offers a moving study of imperfect motherhood that is far more easily punished than assisted.

There's quite a few weakness: some scenes are a little heavy-handed, and the stylised camerawork doesn't always come off, whilst the score is an irritating distraction; the ending, moreover, is perhaps more convenient than it is convincing. But overall there's a lot of humanity here and the director has done very well to highlight such an important, difficult subject so powerfully yet so sensitively.

This is a powerful and bleak British social drama that focuses on the exploitation of children to run drugs for criminals from large cities into smaller towns. Conrad Khan in a really good, sullen performance plays Tyler, a disengaged 14 year old who lives on a London estate with his single mother and younger sister. He finds glamour and excitement by running drugs for Simon, a ruthless street dealer. Tyler quickly sees the seedy underbelly of the trade and eventually violence comes his way. This is a compelling film but the narrative is predictable and there are a host of similar dramas quite like this so it comes across as a little clichéd at times. However, it is extremely well acted although occasionally the direction by Henry Blake seems a little heavy handed and unsubtle. Worth checking out though.

Brutal and realistic story of a school kid drawn into an angle of the drug world known as county lines, written and directed by a former youth worker who knows that life for real.

At under 90 minutes it's economical, well shot, and extremely well cast - that's what hit me most, the faces of these characters really ring true and haunt the memory.

A horrifying snapshot of what lies under the surface of modern day Britain. Director's commentary well worth a listen.

Grim tale of how a teenager gets caught up in a county lines operation. It's a sobering watch and is convincingly plotted, scripted, filmed, and acted. The young cast excel and you really care for the characters. It's bracing, and chilling to think that this is reality for so many young people on the poverty line in the UK. This may well get screened in schools as a cautionary tale. Excellent in every way.

A stunning performance by young actor, Conrad Khan and a film that depicts a situation that’s all too prevalent for some young people in seriously deprived areas of the UK.

The film is slow paced but captures the raw emotions and the explosive and tense situations around drugs and the grooming of young people. With nowhere to turn, no options and a family life that’s fragmented and hanging on a thread; this sorry and sad tale hits home.

I don't know enough about this topic to be in a position to say how realistic it is. The plot, however, and the lad's circumstances that caused him to be drawn into the "county lines" business, come across as plausible. Certainly a film that will hold your attention and make you think. Given that, according to the end-credits, around 10,000 kids may be caught up in this, it is probably a film that needed to be made. Let's hope that those in a position to do something about it watch the film.

Sadly there's not enough originality in this stark tale to set it apart from all the other gritty insights into the underworld of drugs, violence and child exploitation.

As time goes by, the makers of such movies feel the need to focus on some previously neglected horror. Here it is the use of the drug mule's rectum to carry illegal substances, hence the particularly nasty wounds inflicted on him.

Hopefully it is a film that might serve as a warning to some young viewers. It certainly portrays essential truths about life in parts of inner-city Britain, but this aspect is rather let down by a soft-centred ending that runs counter to everything that has preceded it.

Excellent performances by Conrad Khan as the 14 year old Tyler, and Ashley Madekwe as Toni, his mum.

Henry Blake has evidently tapped into his own experiences working in the front line of youth support to make this film, and both the story and the performaces throughout are entirely convincing.

We see how the children of the precariat become extremely vulnerable and susceptible to being sucked into dangerous choices. Thus the problems are handed down from generation to generation as the rich get richer.

The film is in similar territory to both the Education segment of Small Axe (2020) and Rocks (2019), all dealing with the impact of bad divisive policy on young people in difficult circumstances. Of the three Education has the most upbeat ending, whereas this leaves one very aware of the issue and some of the factors driving it but with no resolution in sight.

An honest and plain portrayal of a young man, bullied in a pupil referral.

Drugs, this almost costs him his life, crossing county lines, from a nurturing brother to dealer.

Conrad Khan is a brilliant young up and coming actor