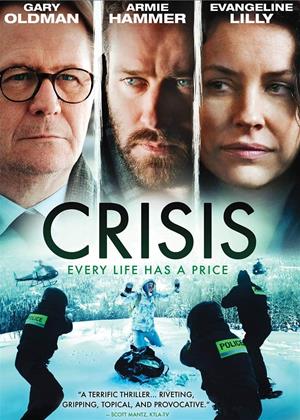 Sign up
Sherlock Holmes: The Hound of The Baskervilles

Not released
The Woman in the Window

Not released
Intrigo: Death of an Author

Not released
No Night Is Too Long

Not released
The Fall of the American Empire

The opioid epidemic is usually given such a narrow vision that we don’t often see the big picture. Crisis is a film that attempts to open the scope a bit wider to showcase just how far-reaching this issue goes. While such assembly does create an off-tone and seemingly scattershot approach, the overall effect is intriguing enough because of the robust casting and strong atmosphere of this anthology.

Dr. Tyrone Brower is wrapping up some university trials on a painkiller designed to be non-addictive. However, his testing results do not yield favorable answers when his lab mice turn up dead after a 10-day trial. Though committed to reporting his findings, the major pharmaceutical company that is producing the painkillers wants Brower to cover up his findings. If he complies, he’ll receive a huge amount of funding for his lab. If he fails, they will smear and discredit him out of the picture.

Meanwhile, federal officials attempt to go undercover and bust a series of cartels in one large sting operation. The cartels are seeking to combine their efforts in better distribution of the highly addictive Fentanyl. After many meetings and dealings, law enforcement attempts to close in on the cartels as the drugs become more visible but there is so much tension and unease within such dealings that anything can go wrong. It doesn’t take a genius to see this deal will turn violent soon with shootouts guaranteed.

Finally, there’s the story of an architect who is a recovering addict trying to handle her reclusive son. When she learns that her son has turned up dead due to a drug overdose, she is crippled with grief. When that grief subsides, she turns that sadness into a rage by setting her sights on seeking out the trailer that led to her son’s death. The lengths she is willing to go will skirt the law as well when a pistol becomes a tool in her quest.

These three stories are slice and distributed throughout Crisis to provide a bigger picture of just how far the problems of drugs extend. However, in doing so, there’s a bit of a confliction of tone. This is mainly because all three stories feel like many different movies. The story of the professor is more akin to a courtroom drama while the stories of the cartel operations and a mother’s revenge fit neatly into thriller tales. There’s a decent amount of ambiance that remains firm throughout but the general tone seems to fluctuate with the different character motivations.

Where the film is at its best is with the stunning performances by Gary Oldman as the conflicted doctor and Evangeline Lilly as the desperate mother. They deliver top-notch performances where they’re expected to showcase how much fury they have for a system that would willingly let people die on the streets in the name of drugs rather than take this situation with the gravity it deserves.

Crisis manages to be just entertaining enough to avoid being a pointless exercise in a meandering anthology of stories on the issue of drugs. Being semi-based on true events, it may also help one broaden their perceptions on just how far the opioid epidemic stretches. That’s the hope. If not, it at least boasts some strong performances from a capable cast and has its heart in the right place to be more than just a run-of-the-mill thriller that clogs film catalogs.