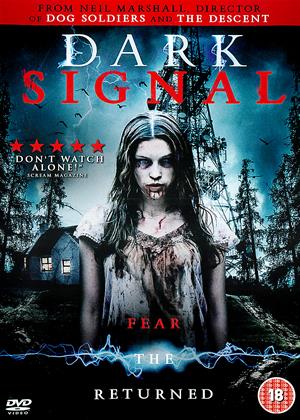 Synopsis:
Deep in the heart of the isolated Welsh valleys, an eerie hush spreads throughout the deserted wilds. Stranded and terrified, single mother, Kate (Joanna Ignaczewska), finds herself entangled in an ill-thought-out plan: a midnight robbery. On the look-out for her boyfriend, and left trembling in the middle of a secluded forest, she quickly realises she is not alone. With her is the spirit of a murdered girl, bent on seeking revenge. Meanwhile, across the valley at a local radio station, Ben (Gareth David-Lloyd) and Laurie (Siwan Morris) are midway through their last ever radio show.
With the arrival of medium, Carla, and determination to go out with a bang, Laurie and Ben are about to get much more than they bargained for. Patching together fragments of ghostly sounds, they begin to unravel the clues to a frightening crime before doing do the unthinkable…making contact with the dead.
Actors:
Siwan Morris, Gareth David-Lloyd, Joanna Ignaczewska, Duncan Pow, Cinzia Monreale, Eleanor Gecks, James Cosmo, Sioned Jones, Amelie Leroy, Kai Coleman, Jennifer Moylan-Taylor, Malcolm Raeburn, Douglas Durdle, Genna Loskutnikov, Luing Andrews, Karen Bird, Robert Taylor
Directors:
Edward Evers-Swindell
Producers:
Jonas Babics
Writers:
Edward Evers-Swindell, Antony Jones
Studio:
Kaleidoscope Home Ent.
Genres:
British Films, Horror, Thrillers
Countries:
UK

At the heart of this cleverly written story is a resentful social under-achiever who becomes a masked killer. And yet the way the story is delivered, with so many intricate embellishments, makes it far more than that.

Polish Joanna Ignaczewska is terrific as Kate Komisarczyk, mother of a disabled son, who reluctantly agrees to accompany possible boyfriend Nick (Duncan Pow) to a remote house in order rob allegedly wealthy Alan Keller (the monumental James Cosmo) who it seems might just be the notorious figure nick-named ‘the wedlock killer’, who has killed and then removed the victim’s wedding ring finger.

Elsewhere, local radio station JAB Radio is about to record its last ever show featuring Laurie Wolf (Siwan Morris). To ensure the show reaches a memorable conclusion, a Medium is brought in. Carla Zaza (Cinzia Monreale) manages to arouse the spirit of Keller’s dead daughter, and through her, the radio station somehow picks up snippets of Kate’s plight.

These two strands are seemingly unconnected but for Kate’s internet friendship with JAB technician Ben (Gareth David-Lloyd). As the story continues, a series of carefully placed revelations are unleashed that bring the two plots together in a very satisfying manner.

When the killer’s identity is revealed, his motives are sketchy – other than he seems unable to win the affections of women, and that he removes, and makes trophies of, various fingers, tongues etc. On the internet, he believes, he can be anything, and this is how he lures his victims.

The heroine’s actions are occasionally questionable, as if often the case with horror films. Hearing Nick has been attacked in Keller’s house, she then makes her way to that very location, armed with glow-sticks to advertise her presence. Other than that, she shows admirable courage and resolve.

‘Dark Signal’ seems to have received some negative reviews online and I am at a loss to work out why. Featuring Polish, Italian, Scottish, Welsh and English actors in one production seems to have rankled a few, but why? The UK is a multi-cultural society. Although I usually steer clear of commenting on other reviews, I should also mention that some have lambasted a lack of originality, and that ‘Dark Signal’ can’t decide whether to be a slasher film or a ghost story. To me, surely the melding of the two approaches – something very rarely attempted – demonstrates exactly a very original approach. Director and Writer Edward Evers-Swindell has created an intricately plotted film that is very enjoyable, exciting and pretty frightening in places. The plot also makes perfect sense, which is rare, but you have to pay attention.