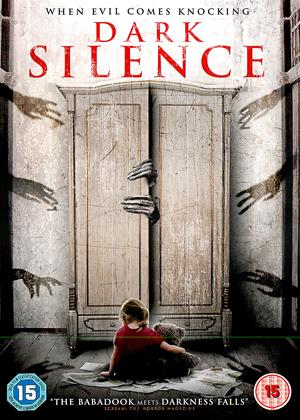 Synopsis:
Craig (Aaron Stielstra) moves with his daughter, Jennifer (Eleonora Marianelli), into a new home after the death of his wife. It's not long before the pair discovers the house is haunted by a dark presence that wants to take over the child. One day Jennifer disappears and Craig must face a terrible truth in order to find his daughter.
Actors:
Désirée Giorgetti, Eleonora Marianelli, Sofia Pauly, Nick Stielstra, David White
Directors:
Raffaele Picchio
Producers:
Russ Rossi
Writers:
Lorenzo Paviano, Raffaele Picchio
Aka:
The Blind King
Studio:
4digital
Genres:
Horror
Countries:
Italy, Horror

Hellish misery for the underdog. - Dark Silence review by NP

There’s a lesson here; always persevere with a film past the first fifteen minutes. On first attempt this seemed very much to me like an Italian production (it is actually Italian/Canadian) trying too hard to emulate a wholesome American ‘family’ horror – which it is in a way – but the results go beyond that kind of blandness.

Following the death of his wife, Craig and his mute daughter Jennifer (Aaron Stielstra and Eleonora Marianelli respectively) move into a dilapidated home. Craig looks and dresses very much like ‘your average guy’, and uses American slang, but has an accent, as all characters do. He also has a slightly manic edge to him. Jennifer is a sweet child, terrifically acted. Her sense of fear and unsureness is conveyed entirely through her eyes, and I would hope Mirianelli has a successful future ahead of her. Craig’s sister Susan (Désirée Giorgetti) provides scant, and often pretty unhelpful support. In flashbacks, wife Helen is played, rather stiltedly, by Sofia Pauly.

Craig seems to be sinking into his own private hell, exacerbated by his daughter’s increasingly dark dreams. As we learn a little more about him, we find he has a catalogue of failures behind him. The dream-like figure of The Blind King (David White), a chatty mummy-like demon, appears to be orchestrating Craig’s anxieties through shared dreams and threatens to engulf him completely. Or so it seems to me – a lot of this is open to interpretation, despite much psychological dialogue. This appears to be the curse of the underdog, the black sheep of the family, the loser.

This is a dark journey that runs out of steam a little toward the end. My score is 6 out of 10.

Dark Silence is a decent attempt at breaking the conventions of horror storytelling – that ends up being a very conventional horror flick; which is saying everything you need to know about the film. To the film’s credit though, Dark Silence has got some really creepy vibe going on for it, which is decent until it becomes excessively nagging towards the end of the film. And not only that, but it would also seem that Dark Silence is (and feels like) and unfinished film at times – adding yet another nail in the coffin of this horror attempt. Does all of the above means that Dark Silence is a bad film?

The film follows Craig (Aaron Stielstra), who moves into a new house together with his only child Jennifer (Eleonora Marianelli). All of these events are occurring after the death of Craig’s wife Helen (played by Sofia Pauly), meaning that now, Craig is a widowed father looking to take care of his daughter to the best of his abilities. Well that’s not exactly the truest either, since he gets some support from his sister Susan (Désirée Giorgetti) who boasts an accent (whether this is a character trait or an acting hiccup – I couldn’t really tell). Anyways, Craig’s daughter Jennifer has lost the ability to speak after the tragic events that led to her mother’s death, and now she only communicates via some strange sketches that depict some sorts of a monster-man hiding in the closet. The weirdest thing however is that Craig shares his daughter’s nightmares as well.

Unfortunately, around the half hour mark is where Dark Silence hits its first barrier. This barrier comes in the form of demons, phantasms, and other apparitions who never seem to stop talking. If only they could’ve been more mysterious or something…

The script also feels underdeveloped and rushed, where some characters only appear to deliver a line or two and then wholesomely disappear into the darkness of both the film and the apparent evils within. Which is kind of ironic when I come to think of it, since the whole point of the film lays in its title ‘Dark Silence’. Oh well.

As I mentioned above, the film has something going for it – mostly found in some good scares as well as some genuine family moments which depict the dysfunction of it all. Apart from that, Dark Silence is rather generic and uninspiring to the point of being a perfectly mediocre film. The soundtrack also stood out like a sore thumb, whist the cinematography, lightning, and sets all looked and felt like stage play props at best.

Everything taken into consideration, feel free to watch this film only if you’re into indie horror filmmaking, but don’t expect too much in return out of it.