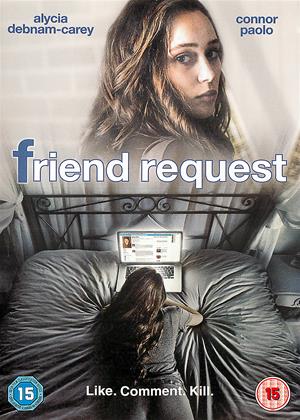 As many people do she shares everything about her life on Facebook and has over 800 friends some probably doesn't know. When she accepts a friend request from the school outcast her Facebook friends start to die one by one . They can't stop uploads or have any control over their Facebook accounts.

This is an above average teen-based horror that taps into an interesting premise. Social media. Unwanted attention. Who exactly are you accepting as a ‘friend’ on what is to all intents and purposes Facebook? And especially pertinent – how social media has become a vital part of our lives; a few years ago, a subject like this wouldn’t have existed.

Laura (Alycia Debnam-Carey) is being cyber-stalked after accepting a friend request from the classroom outcast, who sees her as a ‘sister.’ Marina (Liesl Ahlers) is something of a textbook ‘weirdo’ – on one hand she is just another pretty girl who chooses to dress down and indulge herself in goth imagery. On the other, she is genuinely fragile, stigmatised by a hair-pulling disorder. Things become typically intense, with Marina taking her subsequent rejection extremely badly and displaying she possesses certain demonic qualities.

What I thought was going to be blighted by depictions of the youngsters as massively irritating (teensploitation?), actually takes various satisfyingly dark turns and provides some successful mood-pieces and jump-scares. However, it is content to follow the paths of other horrors before it (particularly ‘The Ring’, I thought), and although the characters are fairly likeable, there’s little to distinguish them. That said, what this does, it does well.