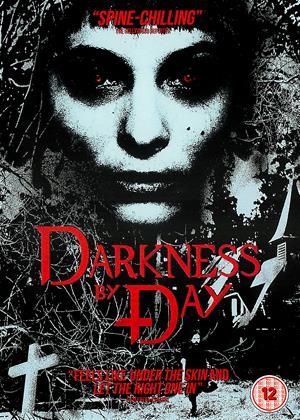 Synopsis:
An outbreak of rabies has appeared in a small village where Virginia (Mora Recalde) and her father Emilio live. Emilio leaves their home to go and help Ostrosky, whose eldest daughter is near death due to some strange illness. Anabel (Romina Paula), Ostrosky's youngest daughter, unexpectedly arrives at the house. She is feverish and weak, she appears to have the same syptoms as her sister. Days and nights become intermingled, telephones don't work, and the heat and oppression are a strain on those living in the house. However, Virginia starts to feel attracted by Anabel...
Actors:
Pablo Caramelo, Marta Lubos, Romina Paula, Mora Recalde, Luciano Suardi
Directors:
Martín De Salvo
Producers:
Pepe Salvia, Laura Tablón
Writers:
Josefina Trotta
Aka:
El día trajo la oscuridad
Studio:
Matchbox Films
Genres:
Horror
Countries:
Argentina

Reviews (1) of Darkness by Day

‘Vampire foreplay almost stretched to feature length,’ is my favourite description of this film. It is so apt, I had to share it.

Having sat through a couple of mainstream horror films recently and desperately wanted them to end, my faith in this genre has been well and truly enlivened by this sloooow slow-burner that documents a lonely woman Virginia (Mora Recalde) visited by her cousin Anabel (Romina Paula), who is reportedly recovering from an illness.

Anabel is virtually somnambulistic much of the time and actually asleep for the rest of the day, but comes to life at night, leaving the sprawling house and making for the neighbouring forest and woodlands. The two cousins do have moments where they converse and become close, however, none more teasingly demonstrated than when they are drinking and dancing to music played on crackling old vinyl LPs. Director Martin Desalvo concentrates mainly on their eyes, the way Anabel coyly glances at her cousin, providing the suggestion of sensuality (which is expanded upon later).

The setting here is utterly wonderful. Virginia’s beautiful old fashioned country home, the tangle of trees nearby, the rolling, sighing skies and the thrashing sea beyond create a tantalising outland in which Virginia exists, far away from society. The accompanying amenities are threadbare and desolate and makes her seclusion even more enviable.

This isn’t a production that will please everyone; I love leisurely paced films with lots of atmosphere – and this has it in abundance. No CGI in sight. In fact, the night scenes were filmed during the day and filtered, not that you would notice (maybe that’s why the translation of its title is ‘Darkness by Day??’). And here’s the thing – this Argentine film has no subtitles. I could not understand dialogue scenes, other than by the gestures – and I still enjoyed it.