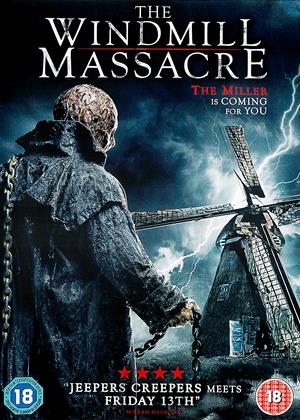 Synopsis:
Jennifer (Charlotte Beaumont), an Australian girl on the run, washes up in Amsterdam. To stay one step ahead of the authorities, she joins a coach load of tourists on a rural tour of Holland's world-famous windmills. When the bus breaks down, she and the other tourists are forced to seek shelter in a disused shed beside a sinister windmill where, legend has it, a Devil-worshipping miller once ground the bones of locals. As members of the group start to disappear, Jennifer learns that they all have something in common, a shared secret that seems to mark them all for doom.
Actors:
Noah Taylor, Charlotte Beaumont, Patrick Baladi, Ben Batt, Fiona Hampton, Adam Thomas Wright, Tanroh Ishida, Mattijn Hartemink, Femke Lakerveld, Bart Klever, Kenan Raven, Edo Brunner, Valentine Berning, Stijn Westenend, Donnya Zidan, Liz Vergeer, Derek Howard, Maxim De Villiers
Directors:
Nick Jongerius
Producers:
Eric Brenner, Nick Jongerius, Daniel Koefoed, Guirec van Slingelandt
Writers:
Nick Jongerius, Chris W. Mitchell, Suzy Quid
Aka:
The Windmill
Studio:
Kaleidoscope Home Ent.
Genres:
Horror
Countries:
Netherlands

Reviews (1) of The Windmill Massacre

“This isn’t hell, this is Holland,” reasons Patrick Baladi’s Douglas West at one point, whilst holed up in a windmill with a group of others, just as stranded as he is. Baladi, perhaps best known for his role in ‘The Office’, heads a truly excellent cast in what turns out to be a hugely enjoyable horror.

First of all, we meet Jennifer (Charlotte Beaumont), who is operating as a child minder under an assumed name. Soon we discover she has run away from her native Australia due to a tragic accident. We’re not told specifics, but she continually suffers flashbacks and what she thinks are hallucinations. It turns out she set fire to the family caravan, deliberately burning alive her abusive father – and by accident, her young brother.

Boarding a bus for The Happy Holland Tour, alongside a small group of others (despite having no ticket – “Ah well, what’s another sinner? Just joking,” jests the weary driver/guide Abe (Bart Klever), all of whom have guilty secrets of their own), their crimes are revealed at leisure throughout the film, and they are briskly – and gorily – dealt with by a ravaged, scythe-wielding killer. Only West’s young son Curt (Adam Thomas Wright) appears to be an innocent, although at times, the film allows us to have our doubts about him.

There is a truly diverse cast here, of many ages. No clichés, no stereotypes, just very real characters played by excellent actors (especially Wright, who exhibits none of the precociousness displayed by other juveniles). Curt suffers the most, perhaps; hearing his strained father has done something horrible to his mother, he then has to watch the images, on his mobile phone, of his father being beheaded. His fate is the only one not accounted for at the film’s close.

Even our protagonist has to pay for her crime. As the windmill is set afire, it seems history is repeating itself, with another youngster trapped inside. This time, however, she saves him, but this does not atone for her crime in the eyes of ‘the master’.

Director/Writer Nick Jongerius has guided us on a terrific journey. Ending with Abe’s bus rattling along misty Dutch countryside with another collection of doomed carrion, this never falls into any real cliché. There is emotion, but never over-sentimentality; there is a good balance between story-telling and shock value; even the special effects are economical with CGI, preferring physical effects. Highly recommended.