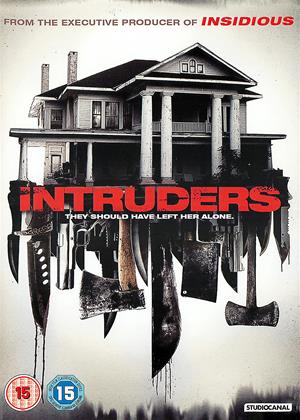 Synopsis:
Anna (Beth Riesgraf) is afflicted with severe agoraphobia, and her crippling fear of the outside world confines her to the safety of her home. When three men break in and invade her house on the outskirts of town, she is physically unable to flee, frozen by her phobia. But the intruders soon discover that looks can be deceiving. Within her home, Anna is hardly helpless at all…harbouring dark secrets and a deadly will to survive.
Actors:
Rory Culkin, Leticia Jimenez, Jack Kesy, Timothy T. McKinney, Joshua Mikel, Beth Riesgraf, Martin Starr
Directors:
Adam Schindler
Producers:
Lati Grobman, Erik Olsen, Jeff Rice, Steven Schneider
Writers:
T.J. Cimfel, David White
Aka:
Shut In
Studio:
StudioCanal
Genres:
Horror, Thrillers

Beth Riesgraf is excellent as agoraphobic Anna, who has spent years looking after her dying brother Conrad. On the day of his funeral, three men forcibly enter her home, believing her to be away. They intend to rob Anna of the money she has stashed away in the house, a detail revealed to them by Dan (Rory Culkin – MaCauley’s brother), who delivered food to Anna.

Toying with her and her illness, Perry (Martin Starr) throws her outside the house, where she panics and almost has a seizure. Little gestures like Anna self-consciously pulling her skirt over her knees after she has involuntarily wet herself really endear her plight to us. The thugs are hateful, as is the duplicitous Dan, but it isn’t until Perry casually bludgeons Anna’s pet canary to death that we are really clamouring for his suffering.

We are given plenty of reasons to spur Anna on to kill these low-lives. Apart from Perry and the slimy Dan, the ‘leader’ is convincing hard-man JP (Jack Kesy) and right hand Vance (Joshua Mikel). Bad enough they strive to rob someone who is at the funeral (they think) of the long-suffering brother they have cared for, but the powerful acting gives them an extra edge of nastiness. Their inevitable demises are, if anything, not horrible enough.

The house, in which the whole thing is set, provides an effective maze-like prison for them all as they begin to realise that Anna’s intimate knowledge of the place has its advantages, and the building, it seems, has secrets of its own.

This is another ‘home invasion’ project, where the comforts of a familiar environment are turned on their head upon the arrival of uninvited ‘others’. Although the format itself may be limiting, it clearly works if used well and interspersed with interesting, well-defined and finely acted characters and sinister dilemmas. Happily, this is one such film.

Who's the real Criminal in this Film? - Intruders review by CS

Treading a much worn path, exploring themes of Home Invasion, Rape, Vigilantism and Serial Killing, for me this takes the notion of being the victim and turns it on its head, when one realises that the victim is perhaps not that much of a victim after all! Similar in many ways to the 2005 film 'Hard Candy' or 2016's 'Don't Breath', this makes one question what is and isn't acceptable when faced with Crime, do you play the victim, or do you fight back! However what happens when the victim themselves turn out to be a Serial Killer in disguise? At the start Anna comes across as the victim and the burglars the bad guys, but towards the end of the film, I was actually rooting for the bad guys, when it turned out that Anna wasn't so innocent after all, but had committed far worse crimes than her attackers could ever have imagined!