Rent Dekalog and Other Television Works (2016) 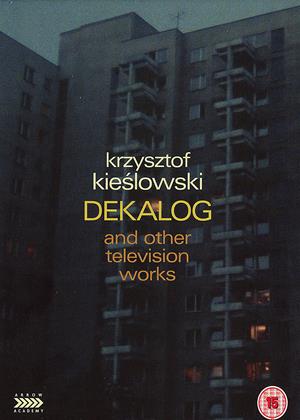 Reviews (1) of Dekalog and Other Television Works

Pedestrian Subway: Few words and few glances contain a rich, yet irreparable, relationship between two young twenty-somethings (one a teacher, the other a window decorator) on a pedestrian subway in Kieslowski's short television feature. A masterful study of love and separation.

First Love: In Kieslowski's docudrama First Love, what should be the great, cosmic intensity of "first love" is instead an act of naivety and innocence. The couple have made the mistake of committing themselves to each other too quickly, without ever having known other kinds of love. Something of their bittersweet tragedy finds its way into Kieslowski's later statement on love, A Short Film About Love, where a young teenager falls prey to his interest in an older woman.

Personnel: In Kieslowski's mild critique of authority, Personnel, the personal and political compete for space like players on a stage. Nineteen-year-old Romek (Juliusz Machulski) finds employment in the costume department of his local theatre, but the idealised prospect of making art is soon frustrated by the corruption of the business; there is dirt under everyone's fingernails, it would appear. Although undeveloped, the plot of Personnel benefit from its semi-documentary, hand-held format.

Short Working Day: Overworked and stylistically inconsistent, Short Working Day struggles to develop any tension or visceral dread across its short runtime, despite taking a first-person perspective on the June 1976 protests in Radom, Poland. Kieslowski's chamber piece is too closeted, too insular, and by toiling over the same conundrum, never breaks into anything more exciting or fresh.