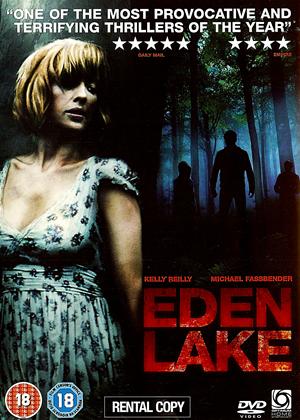 We often enjoy films in the horror/thriller genre, but this was just plain nasty and awful. We stopped watching it about half way through as it was just so disgusting and gratuituously violent. We didn't need to see the rest - it was all so obvious. Who would want to spend a summer evening watching a cheaply-made, cliche-driven film like this? It's a shame there's not an option to award films no stars.

From its slow moving start via the unbelievable storyline through to the ridiculous ending, Eden Lake is a superbly bad horror film.

I found the whole plot unbelievable & at times slightly disturbing.

Would definitely not recommend to anyone unless I disliked them & wanted them to be bored for a solid hour & a half!

started watching this film thinking it was going to be really scary and gory because of the lady who had wrote a reveiw on it.could i please ask the lady was she watching the same film as i was.where was the gory bits that made you be physically sick in the cinema because this was just a run of the mill average film.i didnt jump once and certainley didnt vomit.the only thing watchable in this film is the fact allthough what the kids did was a bit extreme,they represent the mentatlity and behaviour of the youth of today.and also the fact that the parents can often be worse than the kids.this stark reality is actually scarier than this film!

I watched this film at the cinema and it is the only horror film I have ever seen where I physically wanted to be sick. I remember an usher helping me out of the cinema as I felt like I was going to faint.

I believe this is because the graphic nature of the violence is so intense and so realistic that coupled with an extremely real plot, I found it hard not to 'feel' the pain of the inflicted.

With elements of 'Hostel' and 'Them' looming within the overall feel of this film, it is difficult not to come away feeling mortally hopeless about todays society. There are moments throughout this film when you just want it to stop, but like a bad car crash you just cant look away. A rollercoaster ride. If you like violence and bizarre twists, you will love this.

Sign Of The Times? - Eden Lake review by CP Customer

Eden Lake is a superior British horror and one of the best I've seen in recent years. Showcasing that imagination makes up for any lack of budget, putting many other bigger films to shame. You could suggest it is Deliverance set in the Lake District or a juvenile take on the Texas Chainsaw Massacre or even a commentary on today’s youth problem in society. Whatever the comparison, clearly it deserves to be pitted against such excellent films. We follow a couple on a trip away that soon turns into a violent confrontation with local youths. Emotions run high and soon boundaries fade away with the basic instinct to survive kicking in, as the couple try to reach civilisation. The premise is far from original and features such staple clichés as no mobile phone signal. Yet the cast (young and old) are excellent and Watkins harnesses the atmosphere and sense of isolation to great effect. This is one director to watch out for in the future.

great acting, makes your local youths look like little angels in comparison. Great twist at the end. don't watch if your planning a camping holiday soon .

I'm a fan of horror films. I can even tolerate on-screen violence, if there's a point to it. But in this film the violence, which mostly takes the form of drawn-out torture scenes, with both humans and animals as the victims, is disturbing and gratuitous. I spent the movie thinking OKOK, these are nasty kids, now can we move the plot on please?? I only stuck with it because I was curious to see how they could possibly wrap up such a pointless suffer-fest. The end was predictable.

Not much else to say. The actors are uncharismatic. But then, they have little to do except snarl and growl (the baddies) or run around in ever-growing layers of blood and mud (the goodies). Apart from torturing, or gettng tortured, that is.

Perhaps it was my fault for missing the warning about torture in the blurb. But even "Saw" had a point to all the nastiness, however daft. There was no purpose to this that I could see. If it was a movie about juvenile delinquency, the point could have been made in a fraction of the time, with subtlety and effectiveness.

I've seen a lot of B-movie horrors, and they've all been duly panned. But how this load of horror-porn has been taken so seriously I know not. It's just revolting.

Misses most of the targets - Eden Lake review by RP

The story goes like this: couple set out for a romantic camping weekend, fall foul of a group of feral youths, and come off second best. Frankly, it's very predictable stuff – but it is well photographed...

Is it a thriller? Or a horror film? Or a psychological drama? A social commentary perhaps? Or just an exploitation film? I suppose it's all of those – and because neither the film-makers nor audience know what it's trying to say, in my opinion it misses most of the targets. It's not a horror film – there are no shocks, just a few nasty bits. It's not a thriller – what will happen is just so obvious. There is a degree of social commentary in that the youths who torment the unlucky couple are themselves the product of poor parenting – but frankly, this part of the film is not well done and makes for an unsatisfying ending. Not good enough to rate any better than 2/5 stars :(