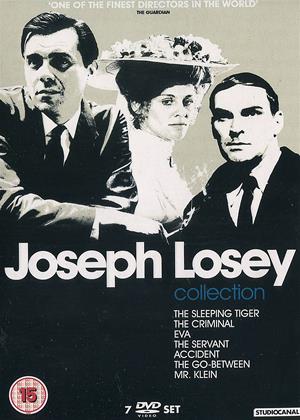 Synopsis:
From back-breaking labour in the coal mines, Tyvian Jones (Stanley Baker), a confident, masculine and crude man from Wales finds himself among the artistic and glamorous people at the Venice Film Festival. As the author of 'L'etranger en Enter', his autobiography, Tyvian cashes out his very first novel's big success by selling the film rights and now, as a contestant, he awaits the festival's reaction on his movie. By his side stands Francesca (Virna Lisi), his lovely, deeply in love with him young fiancée who is also assistant to the film director.
When Francesca reluctantly flies to Rome for a conference, Tyvian returns to his cottage in Torcello, only to find Eva (Jeanne Moreau), a mysterious, seductive blond woman with her escort occupying his place. All wet from the night's heavy downpour, Eva's feminine physique that pulsates with magnetism demands Tyvian's immediate attention, who like a moth to a flame, is irresistibly drawn closer to this dangerous siren. Until now, no woman had such an effect on Tyvian's arrogant ego who different from what he was accustomed to, he is now taunted, tempted, teased and finally, seduced beyond reason forsaking his vows to Francesca. Sooner or later, Tyvian will accept the fact that he stands powerless before this heartless modern Circe, but in the meantime, what will become of innocent Francesca who is trapped in the middle?
Actors:
Jeanne Moreau, Stanley Baker, Virna Lisi, James Villiers, Riccardo Garrone, Lisa Gastoni, Checco Rissone, Enzo Fiermonte, Nona Medici, Roberto Paoletti, Alex Revidis, Evi Rigano, John Pepper, Van Eicken, Peggy Guggenheim, Gilda Dahlberg, Nicky Amey, Giorgio Albertazzi, Vittorio De Sica, Ignazio Dolce
Directors:
Joseph Losey
Producers:
Raymond Hakim, Robert Hakim, Giorgio Baldi
Writers:
James Hadley Chase, Hugo Butler, Evan Jones
Studio:
StudioCanal
Genres:
Classics, Drama, Romance