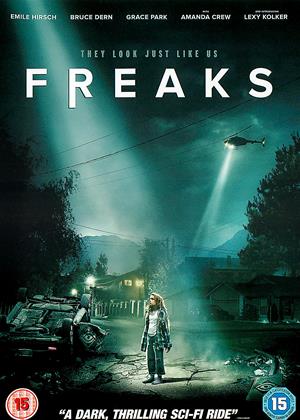 7yo Chloë lives locked up in her house with her father, who tells her that if she goes out the bad guys will kill her. There’s definitely something odd going on because Mr Snowcone’s ice cream van keeps coming around and tempting her outside. Is her father right? Why is he teaching her to be normal? Why is he bleeding from the eye? Is she really in danger or is she the scary one? It’s fun finding out.

Freaks begins as intimate sci-fi that draws you into its multi-layered plot before exploding into an imaginative and exciting action thriller. You might even want to watch it twice to see what you missed first time around.

As usual it’s best to avoid the Cinema Paradiso review and the trailer, which gives away some of the novel special effects that work so well as surprises in the film itself. Instead, watch the informative Xtras on the DVD and learn about topics such as ‘shortsighting the frame’ for extra impact.

Not all superhero films need to have the most lavish of special effects or the biggest of budgets to be a compelling picture. Freaks make the biggest case for this, presenting a story of great surprise and unique characters amid the prolific superhero format. For a film with a woman soaring through the skies and featuring a time bubble, it’s the simpler scenes that pack the biggest punch into this shockingly compelling drama with sci-fi dressing.

The reveal is slow to make the discovery of such superpowers all the more intriguing. We’re first introduced to the little girl Chloe Lewis (Lexy Kolker) inside her home and mostly see the film through her perspective. She lives alone with her father Henry (Emile Hirsch), who tells her that her mother is dead and that she cannot ever go outside. With the film’s warm tone and claustrophobic setting, the vibe seems to suggest something dystopian or post-apocalyptic going on outside. Something weird is certainly going on, especially with an ice cream truck constantly outside.

This film has the perfect building of subversion. When Chloe finds the house easier to leave after her dad passes out, she ventures outside and converses with the truck driver, Mr. Snowcone (Bruce Dern). He invites her into the back of his truck and right away the audience assumes the worst. But just when we think we have this film figured out, something more stranger occurs as we and Chloe soon learn the truth. We learn who the good guys and the bad guys are. We learn what’s going on with the people who are bleeding from their eyes. But, most importantly, we learn about why Henry was so desperate to keep Chloe hidden.

I don’t want to reveal to much just to keep the twists a secret as they’re a wonder to discover. What I can say is that the film does dig down deep into the heart of how a family can drift apart but ultimately needs to come together when facing a terrifying threat. All of this is told through a story that embraces such wild concepts of mind control, time slowing, invisibility, and flight. The very theme harkens to X-Men, one of acceptance and not being afraid of who you are. More importantly, it makes its message clear that one cannot stay in hiding forever and needs to face their fears. Even if one of those fears is Grace Park playing a dangerous agent who wants people like Chloe dead.

The performances here are fantastic, especially when so many characters are expected to be more in on the situation than Chloe. Hirsch puts in a great deal of desperation and sadness for trying to do the right thing for his daughter, even at the cost of his own life. Dern gives a fantastic performance of a man also trying to do the right thing but struggling to make his plans come out in just the right way. Kolker perfectly embodies that conflicted soul of a girl who just wants love but may be afraid to seek it out. All of them are in top form that requires much of their talent to serve in place of special effects which are by no means bad but certainly not the highlight.

Freaks is that perfect example of a film you can turn to when someone decries that superhero films are all the same and have nothing interesting to offer. It presents an X-Men that could’ve been, one that embraces its allegory hard and never relents in making it stick hard. Few superhero movies, even low-budget ones, ever reach such heights as this film.