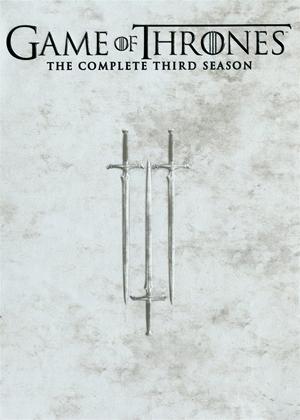 Reviews (2) of Game of Thrones: Series 3

Mediaeval epic fantasy continues - just don't get too attached to any characters :) - Game of Thrones: Series 3 review by RP

Now that I've watched Season 3 I've got withdrawal symptoms - I don't want to watch the series one episode at a time on TV, but to go for the whole immersive experience of a box set. And that isn't scheduled for Season 4 until early 2015. Can I wait that long?

Season 3 has the same format as the preceding two with 10 episodes of just under an hour each. Battles continue across Westeros, backstabbing and political intrigue abound, alliances are forged and broken, treachery is everywhere, new alliances are cemented by marriage. The most powerful man appears to be Tywin Lannister as he manipulates the cruel boy king Joffrey.

Be warned - don't get too attached to any seemingly leading characters because you could well find them unexpectedly bumped off! In addition to the action within Westeros there is more focus on Jon Snow, the Night's Watch and the wildlings and other beings beyond The Wall and on the Mother of Dragons as Daenerys Targaryen raises an army.

As the series has progressed it is clear that its commercial success has enabled HBO to spend more money on the production, so we have 'proper' armies with armies of extras as well as CGI effects. It all adds to this extravagantly realised epic fantasy world.

A bit of a let down - Game of Thrones: Series 3 review by HM

I looked forward to seeing this film, but once watched I felt that the film had disappointed me. It had all the credentials for a good block buster, but felt that it was all style over content. Not happy to just stick to the Bible story which is amazing in itself, we had Roy Winstone hamming it up. That guy could just not be killed. There were the ridiculous monsters made of rock who could talk, which looked like something out of The Lord of The Rings. Apparently they had been sent to earth by God. Really? Half way through the film, Noah sported a crew cut. Wondered where they got the scissors from? By the finish, I was bored and just wanted it to end.

In it’s third year Game of Thrones has pushed boundaries when it comes to what we expect from television and while season 2 didn’t quite entice audiences in the same way as it’s first season it provided many water cooler moments worthy of mention. However Season 3 of this sword and sorcery series seems to be building to one solitary moment, a terrific and haunting moment of television but for the rest of the series it just feels like its buying time.

Season 3 follows the continued players in the titular game as Robb (Richard Madden) seeks to repay the Lannisters for his father’s death while Jon (Kit Harington) faces the wildling army to the north as Tyrion (Peter Dinklage) faces the return of his father Tywin (Charles Dance) to King’s Landing as he starts to lose ground in the game he was until then winning. Meanwhile word of the White Walker threat begins to spread as winter gets closer.

While the charm of Game of Thrones is the despicable moves that the players make from Arya’s turns towards the dark side or Cersei’s progressive moves towards gaining more power for her children there are very few machiavellian manoeuvres this year as Tyrion takes a back seat, sidelined by the injuries he sustained last season with most of the seasons treachery taking place off screen.

However this season gives way to one of the finest television moments created in 2013 and while you may find yourself wishing for a little more action and progression or even just a few scenes where old characters reconnect this is strong storytelling that is filmed perfectly. One thing is for sure by the end of Season 3, things in Westeros will never be the same again and some old favourites will bow out of playing the game.