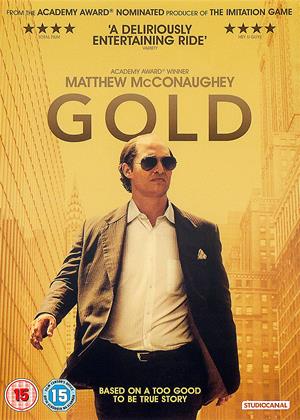 I really enjoyed this film. It's unusual, has a great lead performance (better than Michael M's Oscar-winning one), and is genuinely fascinating and entertaining. With a nice twist though I doubt that is part of the true story this is supposedly based on.

Basically it's a great character study of a flawed hero, and his dream.

Someone watching this with me said afterwards "the reason why I liked this so much is that there are so few women in the film and no silly love stories". And she's a woman! I see what she means - so many movies these days are so pc and wallow in love interest, or over-promote women to hero roles because of 'political correctness' (and the BBC has an absurd target to get 50% of main acting roles in BBC drama going to women by 2020! Good luck with that remake of Saving Private Ryan and Lawrence of Arabia then LOL!

This is a Boys Own adventure and the love affair is with gold.

This is a story of Kenny Wells, ably played by the excellent Matthew McConaughey, who is a drunken gold prospector that teams up with a colleague to discover gold in Indonesia. It is based on a true story and as such could be the basis of a really good film. But it isn't.

Kenny shouts a lot, sometimes in passion for his work and sometimes in fits of bad temper. Glasses are smashed and walls are punched. This brings in the first problem in that we the viewer are often not let in on the issue causing the outbursts, so we see the outrage and fights but don't really know what's going on. It's frustrating for the viewer.

There is a board meeting of the New York company that is trying to merge with Kenny's firm, a piece of paper is brandished and all hell breaks loose with a long monologue (violently shouted again) by our hero Kenny. We've no idea until much later what the subject of the letter is, so we're standing on the sidelines watching a seemingly important scene but not actually knowing what all the fuss is about. This sums up the film throughout, however if you stick with it the plot opens up towards the end, and many of the puzzling scenes can be worked out later as the film develops, but it's not great film making and has the effect of constant un-involvement and working out for the poor viewer.

The second great problem is the modern plague of muttered and mumbled dialogue that is incoherent. It's beautifully recorded with a close mic and certainly loud enough in the soundtrack but it's often colloquial american breathy and muttered gibberish that cannot be understood and the story is lost.

If you're not too fussy about plots and film making then this might pass a wet afternoon for you with some fun, but it could be substantially better if the producer had done his work.

Mc G gets a panza - Gold review by NC

Mc G lot different shape in this one. Yet another loosely based on some facts etc. Bit like Depp in Blow etc etc. Is OK and would have liked to see the normal pics at end of actual people etc.

That often best part of these films!!

A very watchable film, well casted and with plenty of twists and turns along the way. Good quality Blu Ray transfer as well.

Gold is a perfectly fine adventurous flick that puts a modern twist to a century’s old tale: one of hidden treasures, finding said treasures, disregarding those treasures, and finding that the real treasure has been already smoldering within all of us. Also, gold’s expensive too.

Gold is directed by Stephen Gaghan and scribed by Patrick Massett and John Zinman, whilst starring Matthew McConaughey, Bryce Dallas Howard, Edgar Ramírez, Toby Kebbell, and more. In it, there’s a constant flux of ideas and tropes, including a hostile environment, a bad stroke of luck, a good stroke of luck, shifting alliances, weird surprises, double-crossings, betrayals, unlikely friendships, all set in the backdrop of an indifferent capitalist society with no regard for an unproductive human life. And money is being pumped in the machine by the millions, if not billions. The real question though remains: are those prospectors going to finally prove their worth, or all of the investments will go down the drain therefore taking the money along the ride?

The film tries its best to answer these questions; it sometimes succeeds, sometimes falls flat. However, not one moment in the movie can be justifiably labeled as boring. Kenny Wells (played by Matthew McConaughey) happens to be in the midst of it all; he’s an unscrupulous, egotistical, raving maniac who only cares about profit and not much else. Here, another question arises: is Wells a complete and delusional wacko, or a true go-getter who’s not afraid to get his hands dirty in order to get what he wants? (pro tip: he’s kind of both really).

The rest of the cast fits well within the mold that Wells sculpts, thus unraveling the inherent complexity of the whole capitalist ordeal. His relationship with his wife Kay (Bryce Dallas Howard) serves as an excellent remainder of high moral ground in times of great moral peril. Their ever-changing dynamics add layers of ethical truth to Gold, insofar real truth is concerned. Then there’s Kenny Wells’ business partner named Mike Acosta. He and Mike are in it to win it: they’ll never give up even when all odds are against them. However, both of these characters have their own version of reality and truth, and both versions come in unavoidable conflict when all’s said and done. In fact, the latter goes as far as serving as a plot-twist for the film, which is in and of itself a gorgeous and somewhat fitting end to a partnership gone sour.

Case in point, Gold is based on a real-life event (having something to do with a certain Bre-X scandal) from the nineties, and serves as both a moral and an ethical remainder of why excess capitalist greed is not cool. Share some love and rent this film to get the economy going, like now.