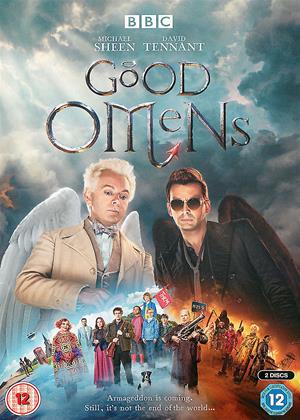 Synopsis:
Aziraphale (Michael Sheen) is a fussy angel. Crowley (David Tennant) is a loose-living demon. They've both been on Earth for over 6,000 years. During that time they've grown quite fond of it, and, against all odds, each other. But there's a problem - the Antichrist has arrived here on Earth, which means the world they have become too fond of will end in flames, if they don't manage to save it. This wildly imaginative and gloriously funny drama follows Aziraphale and Crowley as they join forces in an attempt to find an 11-year-old Antichrist (and his dog) and avert the Apocalypse. Armageddon is coming - but it doesn't have to be the end of the world.
Actors:
David Tennant, Michael Sheen, Frances McDormand, Sam Taylor Buck, Daniel Mays, Sian Brooke, Ollie, Adria Arjona, Jon Hamm, Jack Whitehall, Michael McKean, Amma Emily Ris, Alfie Taylor, Miranda Richardson, Paul Chahidi, Ilan Galkoff, Ned Dennehy, Doon Mackichan, Simon Merrells, Gloria Obianyo
Directors:
Douglas Mackinnon
Producers:
Tim Bradley, Phil Collinson, Josh Dynevor, Paul Frift
Creators:
Neil Gaiman, Terry Pratchett
Writers:
Neil Gaiman, Terry Pratchett
Studio:
BBC
Genres:
British TV, Top 100 TV Series, TV Comedies, TV Sci-Fi & Fantasy
Countries:
UK

Michael Sheen and David Tennant are perfectly cast as the angel and demon in this glorious production of Neil Gaiman and Terry Pratchett's book.

Like Philip Pullmans 'Dark Materials', Fantasy and "Children's stories" become a brilliant vessel for investigating questions about peoples use of religion. In Good Omens Neil Gaiman and Terry Pratchett also do it with exquisite humour.

WELL WORTH BINGEING ON - Good Omens review by JF

I enjoyed this on TV quite recently, and decided that it would be worth seeing at leisure. I got so much more from it, jokes and allusions that I had missed entirely! I had both disc 1 and disc 2, (total 6 episodes) and watched over 2 evenings. Very, very satisfying.

The original Good Omens novel was a great combination of two brilliant minds. It was a Christian fantasy adventure that came with the quirky details of Terry Pratchett as well as the darkly charismatic appeal of Neil Gaiman. Both of their influences can be felt within the book and the miniseries manages to match that similar sensation.

Taking place across all of time (which had apparently began on a Tuesday), two spirits meet amid the formation of humanity. Crowley (David Tennant) is a demon working for hell while Aziraphale (Michael Sheen) is the more meek angel of heaven. While God works his magic on the Earth, the two meet at various points in time and amble about how the world of the morals is looking. One of their first meetings occurs at the Garden of Eden as they watch the first man and woman venture out into the world. They speak of the chances for them surviving and then debate whether or not they should have given them a sword.

They meet off and on but come together for a more immediate threat. It seems that the powers that be are seeking to speed up the apocalypse by bringing about the anti-christ, a demonic child who will bring about the end of days. Crowley, having grown used to his swanky car and the tunes of Queen, is a bit reluctant to take part in making sure this action happens but does so anyway. He’ll later meet up with Aziraphale and they’ll bicker some more about what is to be done with thier current state of heavenly and demonic tasks. What they come to learn is that so much of this staging seems to run contrary to the actions of their organizations, as well as their own devotion to keep living on Earth.

Narrated by Frances McDormand, the show bounces around multiple points in time with multiple characters. We follow various characters during the coming apocalypse, from an oracle discovering her lineage to the actual anti-christ kid himself. While they all find themselves trying to figure out how they play a role in the coming apocalypse, more or less becoming the audience, Crowley and Aziraphale struggle to unravel the deeper mystery behind the end of days. What follows is a stirring, mind-bending and very quirky adventure of an angel and demon who may have some sexual tension between them.

Though Terry Pratchett had passed away before the production of this series, Neil Gaiman stepped up to represent his portion of the book by penning the screenplay. His writing, along with Douglas Mackinnon stylish direction, manages to replicate and amplify that meandering wondermen seen in the many television adaptations of Pratchett’s work. The characters all feel lovingly odd, the tone a rich mixture of dark and delightful, the special effects worthy of being ambitious enough to rise Satan (not seen in the book) and the comedic timing is right on point for a show brimming with visual effects of angels and demons. Good Omens is more than just good, as it may just be the best adaptation of any of Pratchett’s work.