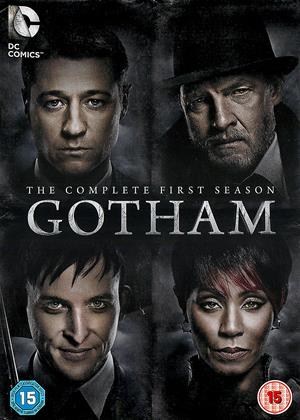 Prequels are tricky - just ask George Lucas! There are two problems with this series. Firstly, it's a Batman spinoff in which Batman himself doesn't appear because Bruce Wayne is 12 years old and hasn't invented him yet, so it has to concentrate on secondary characters instead of the elephant who should be in the room but isn't. And secondly, it's far, far too long. It's equivalent to the entire Star Wars saga (including the ones they haven't made yet) or the whole Harry Potter franchise, and twice as long as Christopher Nolan's Dark Knight trilogy, which actually had grown-up Batman in it fighting villains and everything. And it only covers a few months in the youth of the Caped Crusader - we are literally watching Bruce Wayne grow from adolescence to manhood in real time! At this rate, we'll first see him in a bat costume round about 2020 at the very earliest.

Meanwhile, we see a great deal of a wooden actor portraying the utterly one-dimensional Detective Jim Gordon, who, unlike every other version of the character going right back to 1939, is blandly handsome in an off-the-shelf standard action hero way, does not have facial hair or glasses, and above all, looks nothing like the much more expensive Gary Oldman. We also get to know a lot about Oswald "Penguin" Cobblepot as we follow his rise from creepy little mook to crime-boss of Gotham City, which is just as well, since he's by far the best character. Even so, he was born in the pages of a comic-book so he's not that complex, and his limited schtick gets a bit repetitive over the 15-hour running-time, despite the writers trying to flesh him out by turning him into a cross between Steerpike from "Gormenghast" and Norman Bates.

As for the others, they're a mixed bag. The lad playing Bruce Wayne manages rather well, but is mostly left on the sidelines in an interminable and very dull subplot about corporate corruption (or something), and his cute romance with 13-year-old Selina "call me Cat" Kyle seems more appropriate for an audience far too young to be watching something featuring explicit footage of spurting blood, dismembered body-parts, and eyes being torn out with spoons! Ms. Kyle, alas, is played by a truly dreadful actress, as are several other major characters. The grittily rebooted Alfred is far more interesting than Jim Gordon (as well he might be - back in the day, his dad was Doctor Who, so he should know all about improbable heroics) but doesn't get anywhere near enough to do. And talking of gritty reboots, does Maxie Zeus really deserve one? Mind you, since even the Riddler gets one, why not? I kept expecting King Tut to show up as a serial killer who literally mummified people.

As a mini-series, this would have been very good indeed, perhaps even great. As a bloated maxi-series, there's far too much padding, especially in the first half, and after taking forever to get anywhere, the storyline resolves almost nothing that really matters. Ah well, there's always Series Two, if you have the patience. I'm not sure I do.

If American audiences love a good show about villains the likes of Breaking Bad and House of Cards, the city of Gotham has plenty of antagonists to go around. From the cackling Joker to the schizophrenic Two-Face, there seems to be a bad guy born every day in a city known for its alleys of crime and ineffective insane asylums. But at the end of the day, they're only satisfying in the way they are foiled by Batman. And that is the biggest problem with Gotham - a crime drama that's all villains with heroes yet to be made.

As a young Bruce Wayne has a long road to Batman after the recent death of his parents, the only hope of justice for Gotham is its latest detective Jim Gordon (Ben McKenzie). The moral Jim finds himself facing a corrupt police department gripped by crooked cops controlled by the epidemic of mobs. While Gordon attempts to maintain some sense of law and order against the endless stream of gangster politics, he also has to contend with other psychopaths/future villains and protecting Bruce Wayne given his target status. And he has to deal with his conflicted drunk of a partner, Harvey Bullock (Donal Logue). And an awkward relationship with mafia men. And a decreasing love life with his wife Barbra. And whatever else can go wrong in Gotham to a man who wants deliver justice without being Batman.

While Jim gnashes his teeth as he claws up the mountain of corruption, a meek Oswald Cobblepot (Robin Lord Taylor) attempts to work his way up the mafia food chain. His is a journey that's easier in that he merely has to kill as many people as it takes and talk his way out of any situation. There is one episode in which it seems that Oswald kills somebody at the end of every scene just to start at the bottom as a chef. He's a skinny little man - nervous and twitchy with his odd waddle - but with enough time and obesity he could someday be The Penguin.

My ribs hurt from how hard and often the show feels the need to introduce and reintroduce characters that will become iconic Batman villains. Selina Kyle pops up as a street orphan that befriends Bruce Wayne, constantly referred to as Kat for her cat-like stealth. A young Jonathan Crane takes an interest in his father's sick experiments involving fear toxin. A wiry Edward Nygma serves as a forensics expert who is dangerously obsessed with riddles. Did you catch all those villains eluded to in those clues? Don't worry - the series will repeat these clues for nearly every episode until even the dimmest of audiences will figure out who becomes which villain.

When the show isn't dancing around its origin of rogues, Gotham struggles to be the most overblown police procedural on television. It's a formula that may hold your initial attention for all its explosions, gun play and murder that overflows from each episode, but its repetitive nature grows tiresome as the show goes on. People die and betray each other so often in this show that it's hardly a twist or surprise when character A betrays/murders character B. Gotham also lacks a considerable amount of tension for being a prequel series with too many primary characters that we know will not bite the dust in all this violence. It takes a bit of grit out of desiring to see what happens next. Again, more violence to distract from not caring as much about the characters.

It's not that a show all about Jim Gordon's rise to the chief of police can't be done. It was quite an effective drama in the animated movie Batman: Year One where the dark atmosphere of corruption trumped the obvious fate of Gordon. But Gotham attempts to overcompensate by blowing the roof off its dark tone with too much action. We're rarely given a chance to absorb the plot or the characters the way the script quickly whips them away towards the next set piece or extra layer of corruption. Some of the subplots also appear rather out of place involving genetic experiments and supernatural drugs. It feels quite similar to how the program Smallville wanted to be about Superman, but not a Superman show.

As brilliant as Batman's villains are, they just can't hold their own in a Gotham without a hero. You'd expect Jim Gordon to bring some balance to the overabundance of nasty characters, but he does little more than snarl at the bars of his own cage with his tiny victories. Even Bullock, the most charismatic of the lot, is still plenty crooked and despicable for most of the season. The whole show is just a muddy tease of what a Batman series could have been instead of an antagonist origin anthology masquerading as a police drama. The show is at least visually pleasing for setting the right tone of the city and the actors all fit neatly into their roles. Now all we need is a reason to care about any of this.