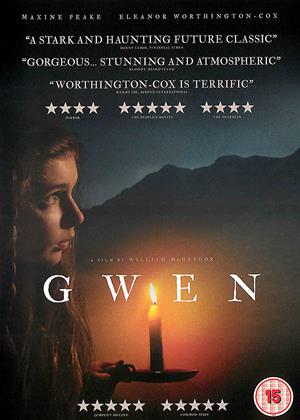 Fancy a couple of hours wallowing in miserableness? Set in the poverty-stricken North Wales of the 1800s, this is the film for you. Teenager Gwen lives near a quarry. Her mother is ill, her father’s away, the mining company is ruthless… As for the weather, it’s bleak (who’d have thought?). Although praised for its acting and atmosphere, it’s a complete downer, more suited to television than cinema (although you’d soon switch channels). Yet another example of depressing small-ambition British cinema miserabilism. Do watch the trailer first.

The reviews so far, by Alphaville and by PD (we can safely ignore the whining rant by PV!) give contrasting reactions to this grim, bleak movie.

I don't see any of the Hardy similarities referred to by PD. Hardy was good at tragedy because he wrote careful build-ups to the tragic endings, and he included some light to contrast with the dark.

Here there is nothing but inarticulate doom, with no build-up and no modulation.

The best thing about the film is its sense of place. Anyone who has wandered around the slate mining area of North Wales will recognise the prevailing air of damp darkness.

It's a pity that the story and the characterisation are so one-dimensional. I love Maxine Peake's work but she is not stretched here at all.

Hardyesque tale of fear and isolation - Gwen review by PD

Writer-director William McGregor’s debut film is more Thomas Hardy than Hammer Horror, and is all the better for it, in my view. The film is carried by a quite superb performance from Eleanor Worthington-Cox, whose bewilderment, fear, strength and sheer spiritual force is Tess of the D'Urbervilles meets Sue Bridehead. For this is a film where a lot more is going on than meets the eye, notably, what happens when a young person’s faith gets shaken, as Gwen begins to doubt her mum has what it takes to lead her out of the family's predicament - there's a great, very brief moment, when she throws a cross on the fire. And also, aka Hardy, it's about social change and the possibility that what Gwen’s family is facing isn’t a disease or a demon, but rather the inevitable end of agrarian life - for nothing could be more frightening than the inevitable industrial takeover. 'Gwen' is a well-crafted folk-style tale of fear, suspicion and isolation, nestled deep within the Snowdonian mountains, where the mundane quickly becomes sinister. Laughter turns into screaming, a passerby becomes a threat, and reality and nightmare bleed into each other. Gwen (and the audience) want answers – but we rarely get them, for McGregor does not pander to the audience.

It's not without its weakness, for while Maxine Peake is very good as the overbearing mother figure with hints of a gentler soul underneath, there's not quite enough to really get under her skin for me, whilst pretty much all the other characters are mysterious types, their motives and concerns unknown to us. And if you're going to do something unremittingly bleak (no problem with this at all in principle, and there are some truly skin-creeping moments, particularly when viewed as they are from Gwen's perspective) then somehow the audience has to be sustained along the way, and occasionally it is in danger of falling under its own weight, whilst the ending (for me) is not handled in such a way to make it convincing. Nevertheless, McGregor ultimately succeeds in creating a distinctly creepy, socio-political narrative.

This is the 2nd worst Welsh film I have ever seen. The worst was the tedious RESISTENCE by Owen Sheers which ridicuolously thinks Nazi invaders in WWII would head straight to a Welsh sheep farm. Yeah right. That was state-funded by our taxes too, as was this dreadful slow miserablist movie (where hardly anyone moves much) - by Wales Film (which refuses to fund much better movies like CANARIES - recommended), BFI, Lottery and Arts Council.

How on earth earth did the writer/director get funding for this non-starter borefest? Simples! TICK DEM DIVERSITY BOXES. So here we have a black man with a Welsh accent as a doctor - in north Wales over 200 years ago, Well even now, Wales as a whole is less than 5% ethnic and most of that is Asian. Hardly any black men in Snowdonia now, and certainly not then. this is SO fake. Rewriting history in pc colours. This sort of colourblind casting can work on stage with Shakespeare etc but it DOES NOT WORK in realism, supposedly historically-accurate portrayals of the past. It is absurd as making Zulu tribesmen white gingers!

AND all men in this movie - all white men - are portrayed as brutal monsters (except the black man of course, and even he is not as perfect as the perpetual victim women and girls).

For the record, PEOPLE oppressed others in the past and most white men were oppressed, and 97% war dead are men, and 85% of homeless on the streets right now are white men too.

I get sick of the endless feminist metoo pity parties not polluting the movie business - they are a brazen blatant attempt to disparage men - as well as portray them as either monsters or buffoons - and to claim women are better in every way, and all problems in their lives are caused by nasty-wasty (white) men.

This film is tedious beyond belief and is FICTION - none of this actually happened. The writer/directer just adds misery on misery for the poor victim women in the plot to try and squeeze as much manhating and sympathy for women from his target audience - who I assume is his mates from film school and other subsidy monkeys.

Just awful, ALL that is wrong with the British and Welsh film industries.

I usually enjoy films reviewed as "boring" but this was the exception. A string of depressing vignettes going nowhere. Profoundly unsatisfying with no discernible plot. No really - don't bother....!

Well acted but a film full of misery and no hope.. Even the weather as expected was wet and depressing.. Interesting tale but just very sad..

It was a sinister tale of greed . Mine owner right nasty piece of work .. You really wanted a happy ending but sorry folks , we were left to wonder what happened to the young girls ..

Most Depressing Film Ever - Gwen review by BB

Simply the most depressing nihilistic film I have ever had the displeasure to see in my life.

Totally not a thriller, it could kill any joy that you had built up in your day instantly.

Do yourself a massive favour and ignore it...….